My Name is Hmmm... Review

From France, this artful drama is designed to stir controversy among viewers, approaching taboo issues in a way that can't help but raise the hackles. But by doing this, the film forces people to think about these things in new ways, challenging accepted wisdom and even the letter of the law. It's a bracingly fresh approach to filmmaking for writer-director-producer Agnes Trouble, who's far better known as the designer agnes b. 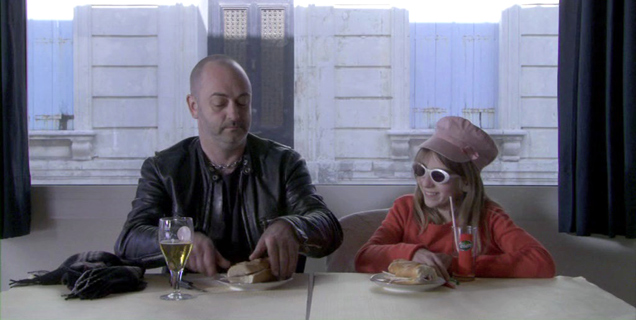 At the centre is 11-year-old Celine (Lou-Lelia Demerliac), who ends up caring for her younger siblings because their mother (Sylvie Testud) is working extra shifts and their father (Jacques Bonaffe) just sits around the house uselessly, moaning about the fact that he's unemployed. But he also has some very dark urges, inviting Celine upstairs for special time that's all too clearly horrific sexual abuse. So it's no surprise that Celine begs to go on a school camping trip, then quietly runs off when no one's watching. She stows away in the cab of friendly Scottish truck driver Peter (Douglas Gordon), who instantly understands everything that's happened to her. So he decides to help her escape.

The film is shot and edited with a lot of swirly and gimmicky stylistic touches that often obscure the precise nature of a scene, capturing Celine's perspective on events while forcing the audience to look closer. This also makes the film feel almost like a caper, as Celine goes on this apparently exciting adventure with a stranger who, for the first time in her life, lets her play as the happy little girl that she should be. Meanwhile, as viewers, we have constant chills down the spine, understanding various ramifications of what's happening and wondering why Peter never calls the authorities. What we know also clouds the scenes of Celine's parents desperately searching for their missing daughter.

The performances are earthy and utterly real. Demerliac is remarkably unaffected, revealing Celine's inner feelings and knowing resolve (the title is how she introduces herself to Peter). Her chemistry with acclaimed artist Gordon is lovely to watch, mainly because he's such a minimalist actor who offers glimpses into his character through subtle actions. As the events come to a startling conclusion, the film continues to show the complexities in the characters, never allowing the audience to rely on preconceptions. Using a new cinematic language, the filmmakers continually refuse to let viewers take the moral high ground here. The result is overwhelmingly involving, and very hard to shake.