It's been 14 years since Nia Vardalos' warm comedy about her raucous extended family became the sleeper hit of the 2002, and now she's back with more of the same silliness. It all feels rather predictable this time around, although there are some terrific comical moments along the way. And the cast is genuinely likeable, even if the characters are fairly thin. 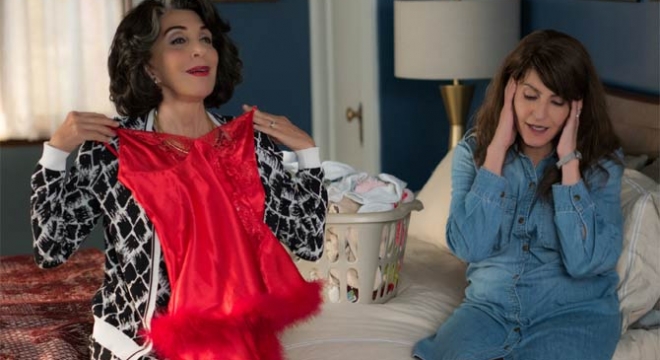 So after all this time, Toula (Vardalos) and her husband Ian (John Corbett) are still living on the same street as Toula's many relatives. She's also running the family cafe with her parents Gus and Maria (Michael Constantine and Lainie Kazan), who are bickering because they just discovered that they're not legally married. Meanwhile, Toula and Ian are struggling to rekindle the spark in their marriage as they both worry about the coming day when their 17-year-old daughter Paris (Elena Kampouris) goes off to university. As meddling Aunt Voula (Andrea Martin) tries to find a suitable Greek boy for Paris, everyone is planning Gus and Maria's wedding. Which of course can't be a small occasion.

None of the movie's interwoven plot threads has any tension at all in it, so the film meanders amiably along. There's never any doubt that Toula and Ian will reawaken their romance, that Gus and Maria will renew their vows or that Paris will find her independence. And without any proper conflict, the film struggles to get the audience involved in any meaningful way beyond laughing at the engaging characters. Director Kirk Jones (who made the original Nanny McPhee) occasionally tips things over into physical slapstick or full-on farce, plus several very cheap gags, but most of the humour is centred on the wacky cultural antics of these colourful family members. The actors invest plenty of charm into their roles, with Martin once again stealing the film as the uproariously over-involved Voula.

Fans of the original film will get pretty much what they expect here, but there's nothing more on offer: no additional depth, no bigger laughs, no surprising revelations. It's so oddly un-ambitious that it feels more like the next episode of a sitcom than a proper movie sequel. At least the film is assembled in a messy style that reflects this family's nonstop chaos, as the large number of hyperactive characters barge in and out of scenes with noisy abandon. And it's all so undemanding that the audience is free to just sit back and smile at the vaguely recognisable goofiness. Although it only occasionally feels anything like real life.

Watch the trailer for My Big Fat Greek Wedding 2: