This independent American drama has been generating headlines and earning awards for its inventive approach to a big topic. It's such a warmly involving film that it can't help but engage the audience as it traces the experience of a young black man at three key points in his life. What emerges is an unusually astute coming-of-age story that encompasses the gangster culture, drug addiction and sexuality without ever taking the simple route.

Set in Miami, it opens with 9-year-old Chiron (Alex R. Hibbert), who is called "Little" at school due to his height as well as the fact that he's unusually sensitive. After school, he roams the streets rather than going home to his junkie mother Paula (Naomie Harris), and one day the cool drug dealer Juan (Mahershala Ali) takes him under his wing, introducing Chiron to his girlfriend Teresa (Janelle Monae), who becomes a kind of surrogate mother. Later when Chiron is 16 (now Ashton Sanders), he still uses Teresa's flat as a refuge, especially when the school bullying gets particularly nasty, damaging his close friendship with classmate Kevin (Jharrel Jerome). Ten years later, Chiron (now Trevante Rhodes) is working as a dealer in Atlanta and returns to Miami to try to reconnect with Kevin (now Andre Holland).

Writer-director Barry Jenkins constructs this film beautifully, echoing themes and images through the three chapters to explore Chiron's trajectory from a sweet young boy to a tough street hood. Running through all of this is his yearning desire for love, and there's a clear underlying romantic connection with Kevin that expresses itself in a variety of complex ways at each stage in their lives. Hibbert, Sanders and Rhodes bring a remarkable soulfulness to Chiron. They may not look much alike, but that's the point: they're the same person inside, no matter how outside circumstances change them.

The supporting cast is very strong as well, offering energy, humour and emotion in each scene. Jenkin's master stroke is to prevent the actors from falling back on the stereotypes, instead forcing the audience to identify with the characters as real people rather than the standard figures we usually see in movies and on TV. And the film's visual approach expands on this, using long handheld takes that cut through surfaces to the emotions underneath. This is an unusual film that takes on significant themes but never feels like an issue movie. It's a compelling and resonant drama that gets way under the skin and stays there. 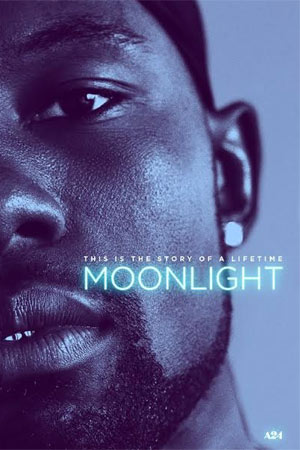