With a simple story and a huge amount of imagination, this gentle animated adventure feels like a blast of fresh air when compared to entertaining but formulaic Hollywood studio animation. Based on the children's book by Tomi Ungerer, it's a French-German-Irish coproduction aimed at adults as much as the kids. Youngers will enjoy its sense of whimsy, but the humour is definitely grown-up. 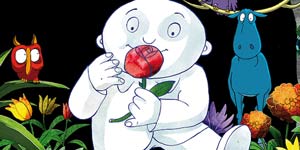 Over the years, the Moon Man (voiced by Thalbach) has grown bored watching over the Earth. So he grabs the tail of a passing comet and rides it to the surface. As he explores the wonders he discovers, he is chased by the President (McElhatton), a megalomaniac who has conquered the entire planet and now has his sights on the moon. So he hires brainy inventor Bunsen (Laffan) to get him there. But Bunsen soon meets Moon Man, and realises that it's more important to help him get home, because children on Earth are unable to sleep without him in the sky keeping them company.

The film has a relaxed tone that effortlessly carries us through the story, using evocative songs (including, of course, Moon River and It's Only a Paper Moon) and simple but gorgeously rendered animation. Refreshingly free of the usual digital look, the animators inventively use textures, light and colour, plus a number of sharp visual gags (watch out for the moonwalk). And while it feels like a bedtime story, the humour is definitely more sophisticated than that. There's even an implied off-screen sex scene between the President and his conniving wife (Helen Mooney).

Meanwhile, the script is packed with smart political touches, including a subtle comment on the abuse of power and friendship. But the strongest theme centres on how most adults have lost their childish curiosity and kindness, so it's no wonder we're bored with life. This is an idea that will resonate with both older and younger viewers. Meanwhile, we're won over by hilarious asides and the involving plot, which brings both suspense and emotion on its way to an ending that can't help but send you to sleep with a smile.