Even fans of chillingly oblique new Greek cinema (see Dogtooth and Alps) will find this pitch-black drama utterly terrifying simply because it doesn't look like a horror movie. But it is. With subtle observation and fiercely clever acting and filmmaking, everything about this movie worms its way under the skin, leaving us shaken by both what we see and how it makes us feel about the world around us. 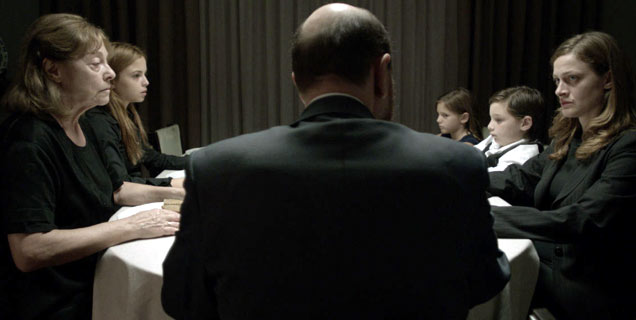 Set in urban Athens, the film centres on a middle-class family that's sent into shock when their 11-year-old daughter (Chloe Bolota) leaps to her death from a balcony. As officials try to understand why this happened, the family is understandably stunned by grief, with Father (Themis Panou) holding them together with his insistent rules. Mother (Reni Pittaki) quietly does as she's told, as does eldest daughter Eleni (Eleni Roussinou), who has two young children (Kalliopi Zontanou and Constantinos Athanasiades) of her own. But the younger teen daughter Myrto (Sissy Toumasi) is deeply disturbed by all of this, and bristles when Father collects her from school. But the teachers and social workers miss all of the signs.

Filmmaker Alexandros Avranas forces us to find these clues ourselves, subtly revealing what's truly going on here without coming right out and saying it. But then, what's happening is so utterly unspeakable that we'd never imagine it ourselves. Along the way, the film quietly explores the complex web of relationships in this family, shot and edited in a straightforward way that raises disturbing possibilities while gradually exposing the truth. The actors are so raw that they infuse every encounter with a variety of interpretations, only allowing brief glimpses of underlying motivations.

Superficially, this looks like a happy, normal family grappling with a personal tragedy. But there's much more going on here, and as the tension builds the film becomes increasingly alarming in its implications. This is a fiercely inventive exploration of dark human urges most people resist and almost no one is willing to discuss. And as it closes in around us, we're too busy being horrified to notice that it's the combination of strikingly clever writing, directing and acting that makes it work so well.