Ransom Riggs' bestselling novel is appropriately adapted into a movie by Tim Burton, the gothic maestro who so expertly infuses his creepy movies with vivid emotions. The film looks flat-out amazing, with lush production design, clever effects and a cast of outrageous characters. So it's somewhat frustrating that the movie feels weighed down by a story that's more complicated than it needs to be. There's too much plot detail explained in the dialogue, and the quirkiness gets a bit exhausting by the time the film passes the two hour mark. 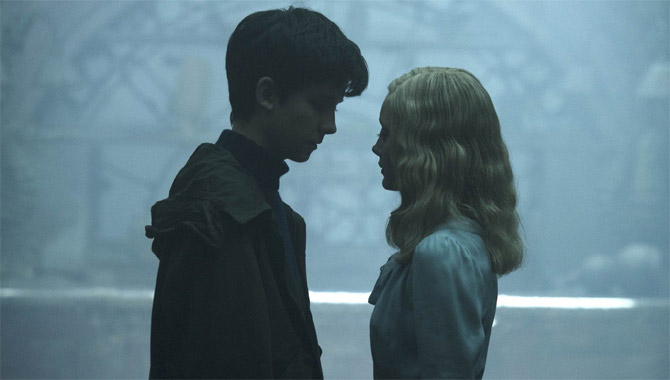 It's set in the present day, as Florida teen Jake (Asa Butterfield) travels to an island off the coast of Wales to bring closure after the death of his beloved grandfather (Terence Stamp). His oblivious father (Chris O'Dowd) goes with him, but doesn't notice that Jake has discovered that Grandpa's bombed-out childhood home actually still exists in a 1943 time loop created by the ymbryne Miss Peregrine (Eva Green), who can turn into a bird and maintain loops like this one. Jake also realises that the freaky Barron (Samuel L. Jackson) is on his trail, so he tries to help Miss Peregrine rescue her children, all of whom have peculiar supernatural abilities.

From here the film takes on a more traditional action trajectory, as Barron and his toothy, long-limbed Hollows try to devour the children's eyes. Yes, there are a lot of grotesque touches in this story, and Burton knows that kids in the audience love this kind of stuff. They'll also be tantalised by the busy visual landscapes, which are magnificent in 3D, grossed out by the yuckiness and excited by the thrilling set-pieces. Adults will find all of this a bit harder to stomach, simply because the wordy dialogue never quite makes sense of the messy plot.

Of course, the actors have a lot of fun. Butterfield is excellent as a young man who initially finds all of this difficult to believe so deflects everything with intelligent wit. It's his point of view that pulls the audience into this nutty world, and like him we fall in love with Green's marvellously over-dramatic Miss Peregrine. The kids are little more than their individual gimmicks (is it a coincidence that screenwriter Jane Goldman wrote two X-Men movies?). But Jackson gleefully brings some sharp-toothed malevolence to Barron. And ace scene-stealers are always welcome, including Judi Dench (as another ymbryne), Allison Janney (as Jake's shrink) and Rupert Everett (as a shifty bird-watcher). In other words, the film isn't as involving as it could be, but it's still a lot of fun.

Watch the trailer for Miss Peregrine's Home For Peculiar Children: