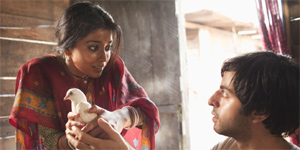 That said, the film is beautifully shot, with a real sense of the light, colour, textures and even smells of the settings. Director Mehta packs scenes with startling details that catch our interest as the decades whisk past. But the core characteristics of Saleem, Shiva and Parvati remain elusive, which makes some of their actions and reactions feel unlikely, while Rushdie's manipulation of their fates seems to be downright harsh. And his overstatement of the central theme wears us out: "In the end, the truth has been less glorious than the promise at birth." Yes, it's an irony overload.