There's a visceral sense of urgency in this cleverly made thriller that holds our attention even when the plot begins to feel over-constructed. It's a ripping film, made with real style and a strong emotional undercurrent that helps us identify with the characters even as things get increasing violent. And perhaps the most remarkable thing about it is the way British filmmaker Sean Ellis drops us right into the streets of Manila. 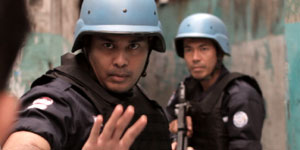 And that's exactly what happens to the young family at the centre of the story. Oscar (Macapagal) is a village farmer struggling to make ends meet, so he and his wife Mai (Vega) gather their two young daughters and head for the big city to find work. But what they discover is far more horrific than they could imagine. Robbed of their savings, they end up squatting in an empty slum dwelling. Oscar takes one of the most dangerous jobs in Manila as an armoured-van driver, while Mai takes work in a seedy lap-dancing club. And both are pushed into increasingly ugly moral compromises. Finally, Oscar sees a way out when his colourfully shady mentor Ong (Arcilla) gets him involved in a corrupt deal.

Even if the plot machinery feels rather creaky, the film continually twists and turns, throwing these people into unexpected situations that are often difficult to watch. It helps that the novice actors are so good at creating characters we can sympathise with on a variety of levels. So we understand their desperation even if we can't identify with the oppressive violence around them. And it's this earthiness that gives the film a real kick.

As Ellis and Flowers' script throws one nightmare after another at this family, we long for them to find even a glimmer of hope. And the final scenes are fiercely inventive in this sense. This is skilful filmmaking that combines ferocious nastiness with raw human emotion while conveying elements of Filipino culture we've never seen before on screen. But then, this same story could be set in almost any city on earth.