Me Before You Review

With a story that links together every cliche from the weepy chick-flick library, this movie uses its doomed romance premise to reduce every woman in the audience into floods of tears. Adapted by author Jojo Moyes from her bestselling novel, the movie will work its trickery on its target audience, and it will just about keep others interested, thanks to engaging central performances by Emilia Clarke and Sam Claflin. 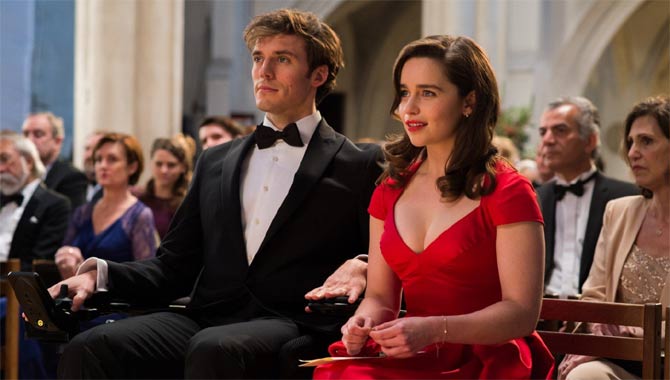 It's set in a picture-perfect British village located next to the ruins of a picturesque castle, where the quirky Louisa (Clarke) has just lost her job as a waitress in a tearoom. But her parents (Brendan Coyle and Samantha Spiro) need her income to make ends meet, so she takes a job with the village's most prominent couple (Janet McTeer and Charles Dance), caring for their son Will (Claflin), who was a high-flying banker until he was hit by a motorbike and paralysed. Working alongside Will's nurse Nathan (Stephen Peacocke), Louisa struggles to connect with the relentlessly surly Will, who believes that there's no point with going on with his life. But Louisa is determined to help him find some hope.

Everything that happens on the way to the unnerving conclusion is deeply predictable, because we've seen it all in movies from Bridget Jones to The Fault in Our Stars. Even the gently wacky romance feels oddly by-the-book, shifting from interested sideways glances to another smiley montage sequence to contrived comedy and gloomy drama. Thankfully, Clarke and Claflin breathe life into these characters, adding personality details and a spark of chemistry that helps the audience feel the connection developing between Louisa and Will. Of the supporting cast, only Peacocke manages to give his character a sense that he has a life off the screen. And it's nice to see Downton Abbey's Coyle against type.

On the other hand, the simplistic script gives gifted veterans McTeer and Dance almost nothing to do but furrow their brows. And the charismatic Lewis has it even worse, stuck in the standard role as Louisa's nice, running-obsessive boyfriend, obviously destined for the scrap heap simply because he's not Will. It's actually rather disturbing that the filmmakers can't be bothered to inject even a hint of realism or originality, and that they so blatantly ignore the more serious edges to pungent themes themes of disability or suicide. Even so, the film is buoyant enough to hold the interest. And fans of this genre will go through half a box of tissues. Which is the entire point.

Watch the trailer for Me Before You: