Don't let the nondescript title put you off: this riveting, beautifully made film documents a lost species, a photojournalist who always sought the true, personal core of a story, regardless of what editors, politicians or readers wanted. Frankly it's difficult to imagine such a thing today, when newspapers pander so much to advertisers. But Don McCullin's images still speak loudly, as they reveal the intimate, sympathetic reality of wars, humanitarian crises and even our own culture. 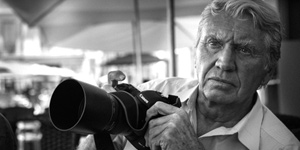 Based in London, McCullin spent most of his career working for The Observer and The Sunday Times in the 1960s and 70s, when magazine supplements featured his striking images of momentous events. These included political scenes in Berlin, starvation in Biafra and wars from Vietnam to Congo to Beirut. In each case, McCullin's photos lock in on individual experiences, revealing the horrors in ways we can vividly feel ourselves. But he never manipulated an image to heighten its effect, refused to take inappropriate pictures and got involved in dangerous situations when other journalists ran away.

Filmmakers David and Jacqui Morris tell McCullin's story cleverly, setting up each assignment with descriptive newsreel footage, then letting his personal observations and fascinating anecdotes carry us through until we see a collection of the staggeringly moving images he shot, often accompanied with details about how they came to be. Most of these are photographs of victims or survivors, so they have a wrenching emotional quality. This view of resilient humanity is incredibly powerful, which makes it all the more upsetting when new editors cave in to pressure from advertisers and governments to keep the images more "reader-friendly". Rupert Murdoch's acquisition of The Times in 1981 essentially marked the end of this kind of journalism.

True journalists will find the quality of McCullin's photographs exhilarating. And far from taking a nostalgic look at a kind of work that has been lost forever, this is an affirming celebration of one man's refusal to sell-out. The film also includes vintage interviews McCullin made back throughout his career, as well as his remarkable shots of London life over the years. And in the end we see McCullin's quiet life today photographing the English countryside, but clearly haunted by his experiences. And we will never look at a news photo quite the same again.