A gimmicky observation of life in Nepal, this is one of those documentaries that offers the audience an experience rather than any actual information. In other words, it's infuriatingly indulgent. That said, the film is an intriguing observation of human behaviour, shown without any real context or meaning. And the rhythm of its scenes has a hypnotic quality that holds the attention if you can manage to stay awake. 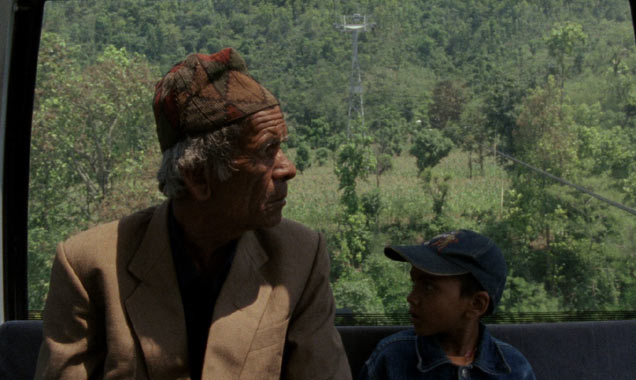 Filmmakers Stephanie Spray and Pacho Velez never explain that the Manakamana Temple is located near Gorkha, Nepal, and that pilgrims believe that the goddess Manakamana will grant the wishes of those who visit her shrine. Since the 17th century, people have made the arduous trek up the mountain to the temple, but there is now a cable car. The filmmakers merely fix their camera in one of the gondolas and capture pilgrims as they travel up and down the mountain. Each scene is a single take the length of the 10-minute journey and into the blacked-out station, so the film appears seamless, showing a wide variety of people on their ascent or descent. One couple appears twice - as they go up and then come down later. With their chicken.

Several of the travellers are utterly silent (the first word is uttered a full 25 minutes into the film), while others chatter incessantly, including a trio of young guys with long hair and rock-star T-shirts who take selfies and comment on how their ears are popping. Three grannies reminisce about the much more difficult olden days. Two English-speaking women discuss photography. Two musicians chat about what it was like before the cable car was installed, then tune and play their instruments for the rest of the ride. And two women munch on ice cream bars, dripping them everywhere ("We didn't get enough milk as children, so we don't know how to eat these!").

There's no narrative thread other than the juxtaposition of old-world traditions and modern technology. One clip merely shows a cage full of jittery goats making the journey. Without music or any supporting information, there isn't much to this film at all. And the only actual filmmaking involved was conceiving the project and then deciding what order in which to edit the clips. But the silent sequences feel beyond pointless. At least the conversations are witty and entertaining intervals in the otherwise dull repetition. So when the couple sighs that "it's fun going to the temple", it's rather impossible to believe them.