Resisting the temptation to capitalise on the camp value of these characters, Channing Tatum and his producing-writing partner Reid Carolin create a startlingly loose and thoughtful follow-up to their 2012 hit. Yes, it's still the story of a group of ridiculously muscled men who take their clothes off for a living and enjoy a laugh. And even without much of a plot it's a remarkably astute exploration of masculinity and gender politics. In the last three years, Mike (Tatum) has made a decent go of his furniture-making business, but his life feels stuck in a rut. 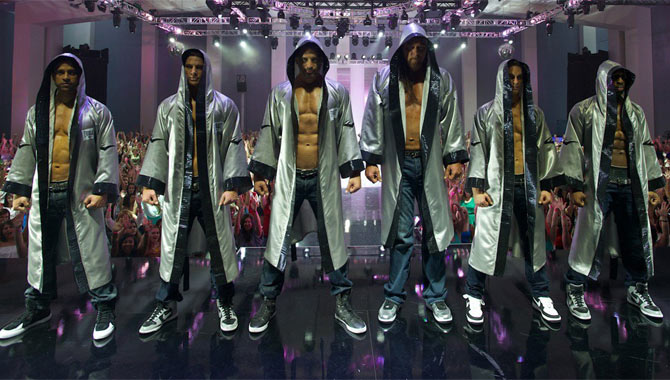 Then his old pals ask him to go on the road for one last hurrah to a stripper convention. So he heads off with new-age healer Ken (Matt Bomer), lovelorn beefcake Richie (Joe Manganiello), artful biker Tarzan (Kevin Nash), macrobiotic smoothie expert Tito (Adam Rodriguez) and food-truck driving deejay Tobias (Gabriel Iglesias). Along the way, they meet up with Mike's old mentor Rome (Jada Pinkett Smith), who provides two new guys for the team (Donald Glover and Stephen 'tWitch' Boss). And they get some favours from a newly single Southern belle (Andie MacDowell) and another old friend (Elizabeth Banks).

There's very little to the story, but the film's improvisational style allows all of the characters to deepen in quiet but significant ways. So the journey these people take is even more internal than the highways they traverse from Tampa, Florida, to Myrtle Beach, South Carolina. The main point is that these men need to figure out who they are if they have any hope of finding happiness, and each one takes his own subtle voyage of discovery. The actors dive into this approach, which requires unusually subtle performances that combine sexy physicality with earthy, boisterous humour. What the film never does is fall back on the usual cliches about machismo or sexuality.

No, there isn't a hint of gay innuendo, so both the lusty dance numbers and the film itself play out as female fantasies. This means that the women are the most forceful characters on screen. A terrific Pinkett Smith struts through her scenes in complete control, while MacDowell and Banks gleefully chomp on the scenery. More intriguingly, Amber Heard has what would usually be the love interest role as Mike's sparring partner, but it's much more introspective than that, actually trying to explore the reason women respond to male strippers. Thankfully, the filmmakers never push these messages, and they resist any pressure to create a formulaic sense of narrative momentum, instead letting the movie meander enjoyably through a story peppered with riotously entertaining dance numbers performed with jaw-dropping physicality by the up-for-it cast.