Fans of micro-budgeted British indies will probably love this offbeat semi-romantic drama, but the fact remains that the film is mopey and contrived, with performances that never quite ring true. That said, it's a nicely shot trip around London with a few beautifully artful sequences. 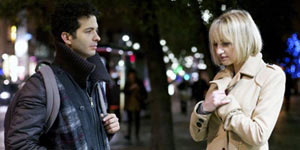 The plot follows two strangers around the city as they get to know each other. Maya (Jourdain) is clearly annoyed by life when she meets a pestering Cuban dancer, Oriel (Vargas). He has recognised that she's a dancer too, so sidles up to get some advice for a big audition he's attending later in the day. But she hasn't danced for three years, and it takes a lot for him to get her out of her shell. Eventually she follows him to Sadler's Wells to watch a performance, then to a dance class he's teaching. And as his audition approaches, she realises that the stakes are especially high for him, because he won't be able to renew his visa without this job.

It's an engaging enough story, especially as this odd couple travels all over London by every conceivable mode of transport - car, bus, train, boat, bicycle. Jourdain and Vargas have plenty of screen presence, with the terrific physicality of trained dancers. But the characters are oddly strained. Maya barely speaks for the first half of the film (for good reason), which requires both actors to express themselves through awkward miming. And writer-director Payne encourages them to go over-the-top, with exaggerated expressions that ring false every time.

Frankly, over-acting never works in the movies, because a camera picks up too many details. So the contrived performances undermine the film's warm, cute tone, which makes the meandering pace feel grating. Everything feels unnaturally subdued, including encounters with side characters from Oriel's rival dancer (Altunaga) and tense ex-choreographer (Barnett) to Maya's needy boyfriend (Brown) and emotional father (McArdle). This is a story about two rather uninteresting strangers who help each other make important decisions about the future. But we don't find out what's really going on until long after we stop caring.