Love Me Till Monday

Love Me Till Monday Review

Refreshingly avoiding the usual romantic-comedy formula, this low-key British film has an enjoyably loose tone even if it sometimes feels rather random in its approach to the story. Drawing on the age-old idea of a young woman searching for "the one", the filmmakers and actors don't appear to have much experience, but they pack their scenes with charm and amusing humour, and even touch on a few bigger themes. 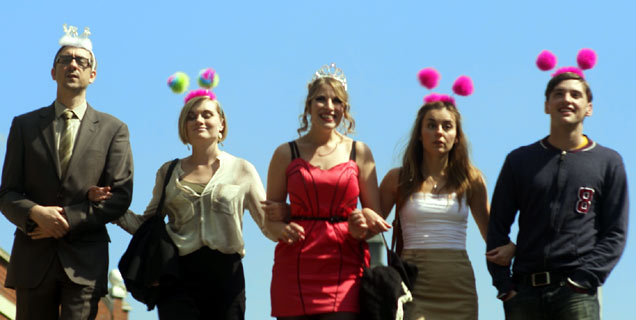 Set in a call centre in Reading, the story centres on 25-year-old Becky (Georgia Maguire), who feels like her life hasn't quite clicked into gear. She's worried about losing her job, even though her boss Steve (Tim Plester) likes her work and seems personally interested in her as well. But the colleague (Royce Pierreson) she has a crush on is apparently seeing the office slut (Sarah Barratt). She certainly doesn't want to end up desperate for a man, like the high-maintenance receptionist (Sarah Jayne Butler), but on a series of office nights out Becky begins to think about settling for anyone with a pulse. At least there's a distraction at home every night, as she's taking care of her cheeky 11-year-old brother Olly (Ludo Hardy) while her mother is away on an extended holiday.

The style of the film might be relaxed and fresh, but the central concept is annoyingly old-fashioned: that Becky's life isn't complete without a man. It seems obvious that perhaps she should concentrate on getting the rest of her life on track, while looking beyond the small team of male employees in her office. But the script never expands beyond her workplace: these people seem to have no other friends at all. At least Maguire gives Becky a sharp sense of humour and some real charm, especially as it's clear that she's actually super-efficient at juggling her responsibilities.

The people around her are equally entertaining: sexy, silly, sometimes cruel. The men are more complex than the women, as each guy is presented as a potential dream date before revealing that he's only interested in one thing. The actors are terrific at striking this balance without ever coming across as rogues. While the actresses are along for more comical purposes. Director-cowriter Hardy films all of this in a casual, often handheld way that sometimes feels like reality TV, with improv-style dialogue and some jagged wit. And it looks very good for such a micro-budget project. But the approach to the themes ultimately feels rather simplistic, going for a fluffy vibe even though there's something a lot more interesting going on under the surface.