Ben Affleck launched his directing career 10 years ago with his film of Dennis Lehane's novel Gone Baby Gone, and he now returns to the author to adapt this Prohibition-era gangster drama. It's a big, beefy story with colourful characters and a snaky, expansive plot. And it's beautifully assembled by a skilled cast and crew. Even so, the film never quite generates quite enough energy to engage properly with the audience. 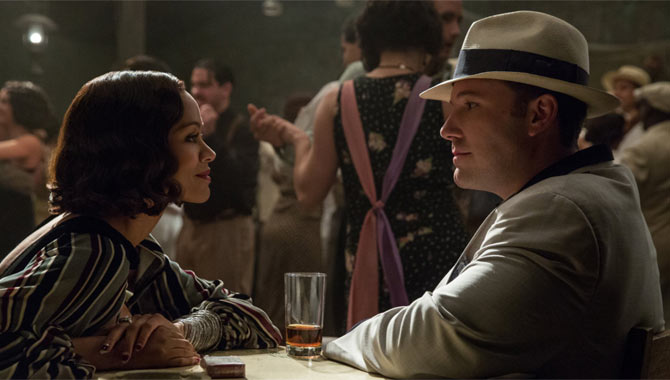 In 1927 Boston, Joe (Affleck) is a war veteran who has turned to crime to survive. But problems arise when he launches a torrid affair with the moll (Sienna Miller) of the Irish mob boss (Robert Glenister). With his life in danger, he turns to the rival Italian mafioso (Remo Girone) for a job, and is sent to Tampa to run their rum-smuggling operation. Working with his pal Dion (Chris Messina), Joe makes a success of a string of speak-easy bars and finds love with a the sister (Zoe Saldana) of a Cuban gangster. Then as he plans to open a huge casino, his gentlemanly agreement with the local police chief (Chris Cooper) is threatened. And it doesn't help that the boss in Boston begins to meddle.

Everything is assembled with a sumptuous sense of style, from the cool cars to the epic suits and hats. The film looks gorgeous, shot with muted colours that echo the subdued emotions of people who never quite say what they think. Of course, this creates a big problem, because it leaves Affleck's Joe looking like a blank slate, intriguing to watch but impossible to sympathise with. Nothing feels properly developed, with romances that seem to exist for no real reason and business relationships that appear to be based on some sort of unexplained subterfuge. The most riveting element of the story is Joe's clash with the KKK, a powerfully bull-headed group that refuses to play by the usual mob rules.

Through all of this, the only character who shows any emotion is Cooper's tormented cop, whose daughter (Elle Fanning) becomes a major story element along the way. And the only moments that generate any suspense are an early car chase and an astonishing final-act shootout. Otherwise, the characters sit around talking, making the film feel much longer than it actually is. Perhaps it could have been livened up by some tighter editing, but the real problem is that there's simply nothing about these people that's likeable. And there's no depth to the story to make it resonate. But it looks lovely.

Watch the trailer for Live By Night: