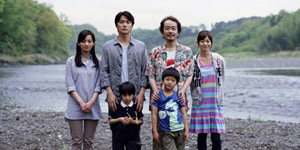 Kore-eda makes sure we can see every perspective in this story, creating vivid characters who interpret things in their own way. As the little boys, Ninomiya and Sho-gen are often the most observant people on the screen. But Kore-eda resists over-egging the cute factor, and he keeps the emotions understated, never manipulating us to a specific reaction. Instead, this is an honest, complex exploration of what it means to be a parent and a child. And it cleverly lets us find the important bits ourselves.