Like a mash-up of Alien and Gravity, this ripping sci-fi horror movie is very effective at generating tension and terror. And it helps that an adept cast is on board to give some weight to characters who are rather thinly written. The script, by Deadpool writers Rhett Reese and Paul Wernick, keeps everything lean and mean, concentrating on the scary stuff while ignoring any thematic depth or topicality. But director Daniel Espinosa (Safe House) keeps it moving briskly.

It's set on board the International Space Station, where a specialised six-person crew is examining new soil samples from Mars. Science officer Hugh (Ariyon Bakare) finds alien life in the dirt, and watches in amazement as the cells grow and cooperate to create an interactive jellyfish-like creature, which schoolchildren on Earth name Calvin. Infectious disease doctors David and Miranda (Jake Gyllenhaal and Rebecca Ferguson) are concerned that this life-form remains contained in the lab. So Captain Kat (Olga Dihovichnaya) and technicians Roy and Sho (Ryan Reynolds and Hiroyuki Sanada) set out to lock things down. But of course, this proves trickier than they thought it would be.

What follows is, unsurprisingly, a stalker slasher movie in which the crew members go down one by one. Calvin is a quick learner, and grows into a seriously menacing creature, complete with the silly addition of a kind of evil digital face. It also gets a few corny point of view camera angles. But mainly Espinosa holds his nerve, maintaining a believable sense of the science and the setting as things get increasingly out of control. Each terrifying set piece is followed by a brief moment of silence in which the characters (and audience) catch their breath. This also allows them to add one back story detail per person, in an attempt to stir up some emotional connection. But it doesn't really matter once the violent mayhem kicks into gear again.

Gyllenhaal is terrific at the centre as the veteran astronaut who holds the record for the longest stay in space. And details about his crewmates make them interesting as well. But none of the interrelationships ever comes to life, and there's never anything under the surface to pull the audience in more intensely. Instead, it's just the simple pleasures of straight-on suspense, as this slimy, slippery creature slithers around the station trying to survive. Espinosa creates a superb sense of the setting, using the constant weightlessness to keep us off balance. And while the film is almost as forgettable as its generic title, it at least provides plenty of freak-out fun while it lasts.

Watch the trailer for Life: 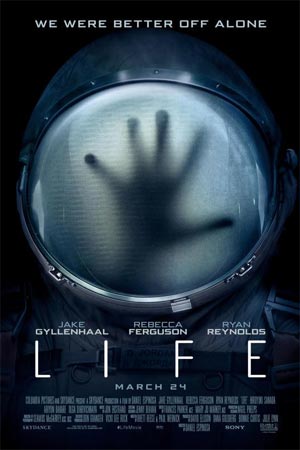