Beautifully written and directed, this fact-based drama is an odd mixture of excellent acting and not-quite-right casting. Anton Corbijn clearly knows the subject, since he's a celebrity photographer making a movie about a celebrity photographer. But in this case, the subject of those photos is the elusively magnetic James Dean, a tricky person to recreate dramatically. 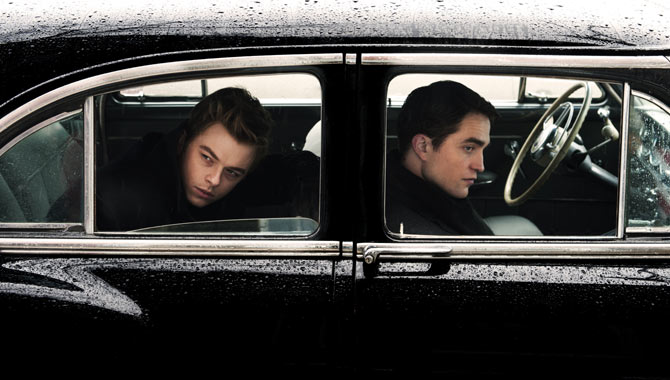 It's set in early 1955, as James Dean (Dane DeHaan) has just finished filming East of Eden and is hoping to land the lead role in Rebel Without a Cause. No one knows who he is yet, but freelance photographer Dennis Stock (Robert Pattinson) has a feeling he could become a big star. When Dennis' agent (Joel Edgerton) lands a commission from Life magazine, Dennis follows James from Hollywood to New York and home to his Indiana farm. But James is evasive and mercurial, and it takes a lot of tenacity for Dennis to crack through his shell to get the shots he needs. Eventually they even become friends, inspiring each other to pursue their dreams on their own terms.

The plot is loose, focussing more on the internal journeys these two men take than on any constructed storyline. And the film switches back and forth between their perspectives, which kind of leaves it without a point of view. But this gives both Pattinson and DeHaan the space to create authentic and complex characters. Pattinson gives his most layered performance yet, especially in scenes involving Dennis' ex-wife and young son (Stella Schnabel and Jack Fulton). Meanwhile, DeHaan creates a character who's thoughtful and fascinating, haunted by his past relationships and unafraid to stand up to the Hollywood system in the form of mogul Jack Warner (a scene-chewing Ben Kingsley). The problem is that, despite a lot of subtle (and more obvious) physical touches, DeHaan never echoes Dean's wiry, hungry energy.

Frankly, this is distracting. DeHaan is a fine actor, and he digs deep to create a character who is facing the promise of enormous fame with introspection and insecurity. But he lacks Dean's brooding intensity (which is suddenly visible in Stock's actual photographs over the end credits). And while the script is packed with bristling dialogue that cleverly explores some resonant themes, there's a feeling that it might be shying away from hints of an even more sparky interaction between these two men. Still, it has a lot of things to say about artistic ambition and the work-life balance. And it astutely portrays a time when Hollywood tried to reel in the powerful stars it created.

Watch the trailer for Life here: