More an experimental art installation than a documentary, this film is mesmerising visually but so abstract that we often aren't sure what we're looking at. And the filmmakers give us very little information, never telling us, for example, that it was filmed over a week-long fishing trip off the coast of Massachusetts. While the ship's crewmen get equal billing with the fish and birds. In other words, it's deeply pretentious, but also rather darkly beautiful. 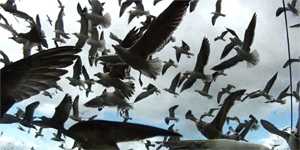 This is sensory filmmaking, compiling scenes shot on a trawler as the fishermen reel in their nets, sort out their catch and clean the fish while scavenging seagulls swarm around them like flies and waves crash into the side of the boat. Much of this is shot at night in long close-up takes that look at details like fish parts sliding around the deck or a lone seaman smoking a cigarette while watching an unseen television. We occasionally hear burly crew members talking in the background, but we never learn anything about them.

Filmmakers Castaing-Taylor and Paravel deployed 11 cameras in this project, passing them between themselves and the fishermen, and even attaching them to seagulls. So the imagery is remarkably off-beat, with the grisly blood-soaked deck contrasting against swelling waves that contain jellyfish or starfish. Most dazzling are the shots in which lights shine up into the sky reflected back by the flickering flocks of hungry birds. Accompanying all of this are the sounds of sloshing water and the creaking ship.

But there isn't even a hint of a narrative. The movie is just a series of visceral images carefully edited together into an epic visual poem. And without anything to link it together, and nothing to engage our brains, it feels like it goes on forever. Indeed, it's probably better suited to being played on a loop in an art gallery. But if you can keep yourself awake, the film has a hallucinatory quality that will appeal to fans of surreal artwork and arty cinema.