Leave It on the Floor

Leave It on the Floor Review

This attitude-fuelled musical is a celebration of youthful expressions of gender and sexuality that fall outside the mainstream. What the film lacks in subtlety and finesse it makes up with sparky characters and meaty songs. 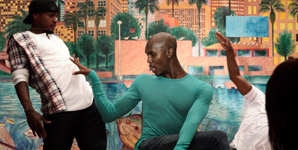 Brad (Sykes) is thrown out of his home by his mother (Dee), who can't bear the thought that he might be gay. Scrounging for a living on the streets of inner-city L.A., he discovers a voguing competition and joins the House of Eminence when reigning diva Queef Latina (Barbie-Q) reluctantly lets him stay.

Rival drama-queen house-members Princess and Carter (Evelyn and Myers) take him under their wings, but romantic feelings complicate things.

In proper movie musical style, the characters frequently break into song to express their inner feelings, usually frustration at how difficult life is on the wrong side of the tracks. The internalised tone of the film is surprisingly involving, even if the songs feel a bit repetitive. Although some stand out wonderfully, including a sassy full-on number in a bowling alley. And the story is also punctuated by fabulously over-the-top club scenes in which muscle men fiercely strut their stuff on the catwalk in high heels and epic wigs.

The striking cast sing, dance and give strong performances as people struggling to get through their lives as best they can. At the centre, Sykes is a likeable young man who's unsure what he wants but doesn't want to miss out on what life has to offer. Director Larry and writer Gaylord are clearly having fun with the characters and situations, never taking anything too seriously while drawing out the story's realistically dark elements. And Larry's camera knows exactly how to capture the natural sexuality of these beautiful black men.

Despite some rather edgy language and violence, the film has a timid approach to any physical connection between the characters, only hinting at sex even as it's clearly on everyone's mind. Indeed, the central point of the film is that African-American men find it especially difficult to express their non-mainstream artistic and romantic feelings. But the climactic ballad about "black love" is genuinely telling, and the film tackles some social and cultural issues head-on.