With improv-style performances, using stories based on real-life experiences, this film has a strong blast of authenticity to shine light on a big issue. So it's frustrating that the narratives aren't more carefully developed to engage emotions. At least the cast keeps everything fresh, infusing their performances with unexpected shadings as writer-director Bruce Goodison creates a terrific sense of the interaction between young people who arrive in London from all over the world. 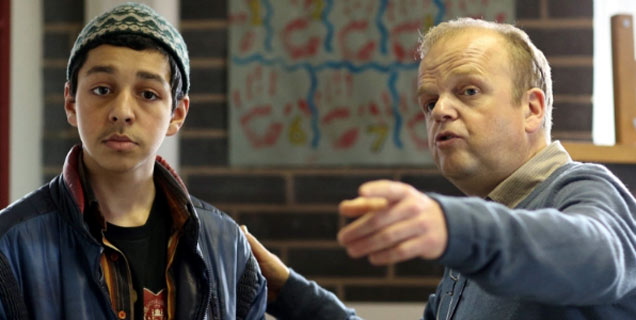 It's set in a youth home run by Nigel (Toby Jones), where teens who have claimed refugee status wait for their cases to be heard. The film settles in on three central characters: Omar (Noof Ousellam) is a natural leader, a charismatic guy who has learned how to work the system and tell whatever story is required. And after waiting so long for a permanent visa, he can't remember which story he told to whom. He befriends newcomer Abdul (Masieh Zarrien), a shellshocked younger guy from the same region in Afghanistan who speaks no English and knows that Omar is lying about his background. Meanwhile, teen Zizidi (Yasmin Mwanza) is scarred and traumatised by years of violence and rape back home in Africa, but the officials aren't sure she qualifies for asylum.

Each of these kids recounts horrific stories of life before fleeing for sanctuary in Europe, and the film continues by showing the callous treatment they get in Britain, both on the streets and in immigration interrogations, where officers misread their nonverbal cues and doubt their accounts. It's no surprise that their first instinct is to run and hide, followed by seeking ways around the system. And the young actors offer natural, relaxed performances that sharply capture their personalities as well as their deep need for a safe place among people they can trust.

Goodison's offhanded, loose approach is great at creating the atmosphere, but never quite gets to the core of any of these kids' experiences. Motivations are unclear, and scenes feel incomplete or vague. Goodison also withholds key facts far too long, revealing information when it no longer makes any difference. But even if it doesn't quite work as a drama, the film is still an urgently important look at the life of a young refugee. Whether or not they are telling the whole truth about their terrible pasts, it seems brutal to treat children in such a cold, clinical way when they're at their most vulnerable. The lingering image is of overworked immigration officers and social workers struggling to get to the bottom of a teen's story, but what that child needs is someone who cares.