Artful and engaging, but also extremely slow, this Argentine road movie centres on an intriguing relationship between two strangers. It's finely shot and edited, and extremely well-observed, but its low-key style will probably only engage adventurous filmgoers. 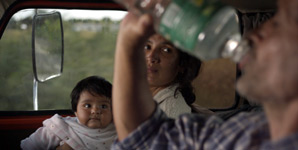 Ruben (de Silva) is driving a load of acacia wood from Paraguay to Buenos Aires, and he has been asked by a friend to give a lift to Jacinta (Duarte).

What he doesn't expect is that Jacinta has her 5-month-old daughter Anahi (Mamani) with her. Without a clue what to say, they set off in silence. But Ruben begins to bond with Anahi, who's impossibly cute and curious, except when she's screaming. And Jacinta is so friendly that she can't help but crack Ruben's tough shell.

The film's first half is virtually wordless, as Ruben and Jacinta cross the border into Argentina, take a few rest stops and run a couple of errands. Their initial interaction is limited to brief glances that reveal a growing curiosity about each other. But then, over such a long drive, there's nothing else to do but talk. Their dialog starts out sleepy and halting before they start to relax in each others' presence. You couldn't really call this bonding, but they're definitely warming to each other. And by the end we vividly feel the tentative connection between them.

The performances are terrific. De Silva has a superbly rough exterior but betrays an inner softness in the way he interacts with Anahi. Watching him slowly open up is wonderful. Jacinta is more interested in interacting from the start, but bides her time and tries to remain silent even though she clearly has something to say. Meanwhile, Mamani is one of the most expressive infants in film history: she completely wins us over, just as she does Ruben.

Filmmaker Giorgelli observes the tiniest details of their interaction with subtle skill. This is a film about the irresistible need to connect with other people, even when we don't really want to. Ruben is happiest when he's alone in his truck, so watching him struggle to cope with these invaders is hilariously prickly and also startlingly sweet. And as they continue along the road, the effect they have on each other is a small miracle.