A seriously impressive feature directing debut with a star-making central performance, this period British drama cleverly references Shakespeare for its metaphorical title. It's actually based on Russian author Nikolai Leskov's 1895 novel Lady Macbeth of Mtsensk. And it takes no prisoners. Insinuating and bold, the film quickly worms its way under the skin, unnerving us to the core with its shocking story, clever camerawork and razor-sharp acting. 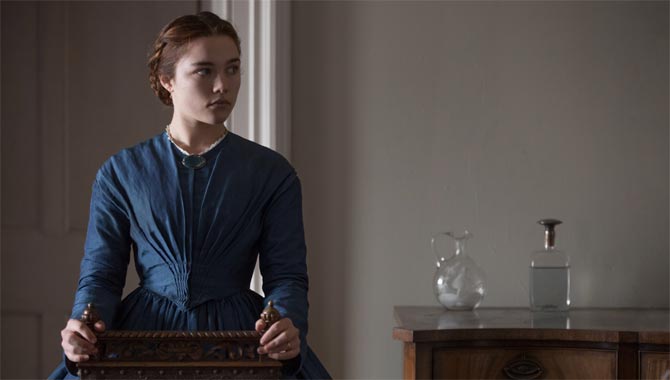 Newcomer Florence Pugh (The Falling) stars as Katherine, who is sold with a piece of scrappy moorland to the wealthy Boris (Christopher Fairbank) and married off to his son Alexander (Paul Hilton). He prefers to look at her rather than touch her, so in her frustration she plots other ways to entertain herself. When the men leave on a trip, Katherine visits the stables and seduces the beefy new groomsman Sebastian (Cosmo Jarvis). And she doesn't really try to keep it a secret. Her maid (Naomi Ackie) remains quiet about what she sees, but trouble is brewing from all sides. And Katherine is fiercely determined that men aren't going to tell her what to do any more.

This is the story of a young woman who finally begins to push back against the indignities forced on her by supposedly civilised society. What Katherine does is increasingly horrifying, but it's impossible to blame her. Pugh's performance is simply dazzling, a breakout turn that reminds you of a young Judi Dench in the way she combines spirited inner strength with intelligence and raw emotion. Katherine is a sometimes scary force of nature, but Pugh grounds her humanity so vividly that it's impossible not to sympathise with her. She also develops sparky chemistry with the actors around her, all of whom are complex and fascinating. Jarvis is particularly good as the lusty stable boy whose conscience begins to get the best of him.

With its gloomy setting and witty dialogue, the film feels like a mash-up of the Brontes and Jane Austen. Director William Oldroyd vividly recreates the 19th century period as a collision between animalistic instincts and high culture. The narrative gets very bleak as it goes along, but Oldroyd and screenwriter Alice Birch cleverly ask the audience to take sides with this woman who reacts to her cruel treatment with even more cruelty. The result is a fresh, energising exploration of the deep-rooted sexism that is still woven into the fabric of today's society. It may be set more than a century in the past, but everything about this movie feels bracingly up to date.

Watch the trailer for Lady Macbeth: