This smart riff on the Coen brothers' 1996 classic Fargo is is a blend of wonderfully offbeat black comedy and much darker themes involving a central character who seems to be mentally unstable. It's also a strikingly original movie, packed with knowing wit and astute references, as well as a complicated central performance from Rinko Kikuchi (Babel) that borders on the surreal. There's sometimes the feeling that the entire movie is a big joke that we don't quite get, but it's also mesmerising. 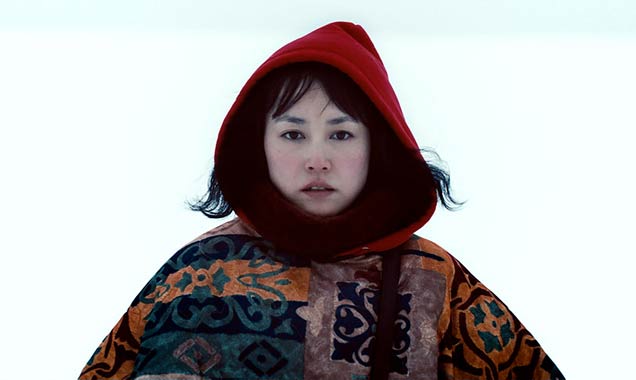 The story begins in Japan, where 29-year-old Kumiko (Kikuchi) works as a clone-like tea lady in a big corporation. Except that she refuses to behave like a clone. Rebelling by refusing to settle down with a husband and kids, she indulges in little treasure hunts. On one, she finds a VHS tape of Fargo pointing to a specific moment when a case of cash is buried in the snow. So she contrives to travel to icy Minnesota and find it. Not only is she clearly delusional about the nature of movie fiction, but her obsession has blinded her to the realities of this kind of journey. Quickly becoming stranded in the middle of nowhere, she gets some help from a kindly old woman (Shirley Venard) and a friendly local cop (director David Zellner). But she can't give up on her quest.

Kumiko is a remarkable movie character, so odd and tenacious that she's both worrying and inspiring at the same time. Her embroidered treasure maps are hilariously minimalistic, as is her inventive approach to finding housing and winter-wear. But is she mentally ill, or has she just snapped back against the oppressive demands of her mother and all of Japanese society to be something she has no interest in becoming? Kikuchi cleverly drops all kinds of hints into her alert performance, but never tries to spell everything out for us. This makes Kumiko a remarkably likeable young fugitive, a liar and thief with a deep yearning for life on her own terms.

Intriguingly, the plot is so nutty that it has a ring of truth to it. Director Zellner gives each scene a lightly comical touch with darkly disturbing undercurrents. It's a delicate balancing act that sometimes feels more like a horror movie than a breezy adventure. But then that's intentional. As the film follows Kumiko's meandering quest for a treasure that never existed, the film is scary and touching, funny and sad. And if the film ultimately feels rather evasive, it's also so sharply written, directed and played that it's likely to become a cult classic.