A sensitive drama about a hidden subculture, this film is sometimes difficult to watch as its naturalistic approach reveals chilling details about a Turkish family living in Austria. The melodramatic script sometimes feels like it's tackling too many issues at once, but by taking such a personal approach the filmmakers help us experience the events ourselves. 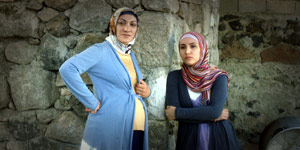 The story begins in a dusty Turkish village, where a lively wedding feels eerily strained. The bride is 19-year-old Ayse (Akkaya), who is calmed by her new mother-in-law Fatma (Koldas) before her marriage to handsome young Hasan (Muslu). Then she travels back home with them to Vienna, where the truth comes out: she is actually a second wife for Fatma's middle-aged husband Mustafa (Erincin), chosen by Fatma to replace her because she is dying of cancer and needs someone to care for their young children. But older daughter Kezban (Imak) feels insulted that her mother brought in an outsider. Especially when Ayse gets pregnant.

Like Ayse, we have some trouble making sense of the extended family she encounters in Austria, including aunts, uncles, cousins, neighbours and Fatma and Mustafa's adult children, who have children of their own. But this bustling atmosphere creates a vivid sense of community in shops and homes, hidden from view. And the key cast members are terrific at creating rounded characters who register strongly. Koldas is especially vivid, as we watch the engagingly unpredictable Fatma shift from warm compassion to ruthless discipline. And Muslu gives Hasan an engaging emotional life all his own, especially as we start to understand why he agreed to this fake marriage long before the script reveals the reason.

We see everything through Akkaya's expressive eyes, and we ache for her to find her own happiness, even if it might be dangerous for her to look at another man. It's as if screenwriter Ladinigg wants to say everything about this subculture in one movie. But the story has enough surprises along the way to keep us gripped. And filmmaker Dag shoots and edits everything through Ayse's perceptive point of view, which grounds the film beautifully.