Kubo and the Two Strings

Kubo and the Two Strings Review

From Laika (The Boxtrolls), this is one of the most beautiful, sophisticated animated films in many years. Not only does every moment of the movie look exquisite, but the story is smart, original and hugely entertaining. The themes it explores with a very light touch are rich and deep, provocative and engaging. And since there's so much to the movie, the comedy is that much sharper, the action that much more thrilling and the ultimate message that much more powerful. 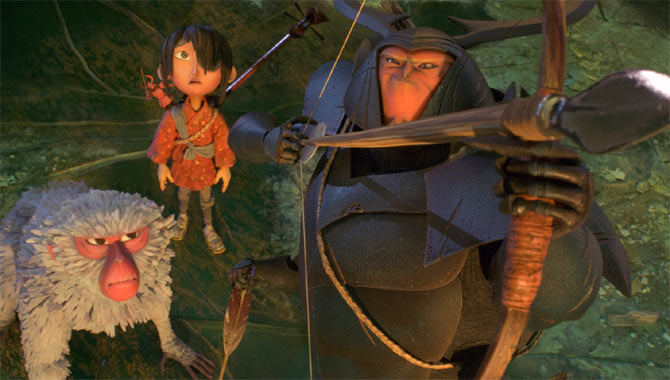 Set in mythical Japan, the story centres on a cheeky young boy named Kubo (voiced by Art Parkinson) who lost an eye when he was attacked as an infant by his grandfather (Ralph Fiennes) and two aunts (Rooney Mara times two). His father died in the struggle, but his mother got him out and raised him in a cave, making sure he never stayed outdoors after dark when his grandfather, the Moon King, could see him. A boy with boundless imagination, Kubo uses music and origami to entertain the villagers with the elaborately epic tale of his father's lifelong quest for three important pieces of armour. But one evening he stays out too late, and has to flee from his attacking aunts. Now his only companion is a sardonic monkey (Charlize Theron) and a forgetful warrior (Matthew Mcconaughey) who has been transformed into a big beetle. Together they decide to search for the armour so they can take on the Moon King once and for all.

This journey is the main body of the movie, encompassing comedy, adventure and some very scary moments. All of the story's twists and turns echo with the complexity of family and relationships, as Kubo tries to understand the things his parents could never tell him about himself. He also, of course, wants to better understand his own magical abilities, which are animated in breathtaking ways throughout the story. Perhaps accomplishing his father's quest will bring answers. And of course the real challenge for Kubo is to realise that everything he needs is right around him.

The voice work is terrific across the board, creating proper characters with big personalities rather than echoing the starring casting. These are the kind of movie characters who are hard to shake: intelligent, funny, vulnerable and real. Kubo, Monkey and Beetle are each on their own individual journey, animated in a dazzling combination of stop-motion and digital effects. The story surges with momentum that's riveting, and when the emotions come, they are so real that we can't help but respond. It's rare to find an animated feature that feels like a proper movie, never falling back on tired pop-culture references or hyperactive mayhem. This is simply one of the best films of the year.

Watch the trailer for Kudo And The Two Strings: