Bizarrely, this Dutch film tries desperately to wedge true events into the shape of an American thriller, but the action sequences are so lacklustre that a fascinating story ends up feeling dull and pointless. It's even been rewritten in English, using a random range of British, Australian and European accents. So while the plot manages to just about hold the interest, the film drags out the story and struggles to find any point of emotional resonance. 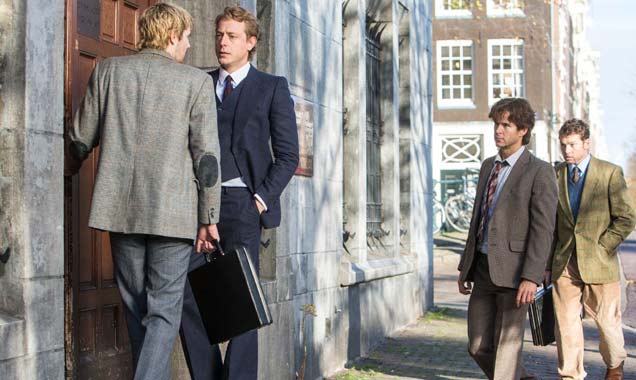 This is about the largest ransom ever paid, in 1982 Amsterdam. Faced with the collapse of their construction company, Cor, Willem, Jan and Frans (Jim Sturgess, Sam Worthington, Ryan Kwanten and Mark van Eeuwen) make a desperate decision to risk everything by kidnapping the billionaire head of the Heineken beer empire, Freddy (Anthony Hopkins), demanding a $60 million ransom. They manage to get him into their hideout, but are frustrated as the days drag into weeks while the police fret about the case, believing that they are dealing with a major international crime ring. The question is whether these amateurs can maintain their cool and pull this off.

Further wrinkles are supplied by the fact that Cor is expecting a baby with his girlfriend (Jemima West), who happens to be Willem's sister. This creates an intriguing dynamic between the two men, so the relationship depicted by Sturgess and Worthington is by far the most compelling thing about the film. Meanwhile, Hopkins does his best to walk off with the movie in a superbly relaxed turn as a cocky, demanding victim who's more concerned about his also-abducted chauffeur (David Dencik) than himself. All of these elements have the potential to add tension and intrigue to the movie, but British writer William Brookfield and Swedish director Daniel Alfredson never bother to properly deepen most of the characters or situations, while continually watering things down with under-powered chase sequences.

All of this is a shame because the true story has the potential to explore issues like economic disparity, police inaction and even how a group of close friends can be torn apart by mistrust when a lot of cash is involved. This theme, that you can have either friends or money, seems to be the film's ultimate message, but even that rings false because the script insists on wedging everything into a formulaic plot structure, which put all of the emphasis on the superficial action elements. And by abandoning realism and complexity, it ends up feeling like a mediocre TV heist movie.