An entertaining hybrid of satirical comedy and action thriller, this madcap adventure swerves wildly between grisly violence and silly slapstick. Thankfully, its central characters are played by the likeable Keegan-Michael Key and Jordan Peele, with able support from a range of up-for-it A-list supporting players. Plus perhaps the most adorable kitten ever put on film. 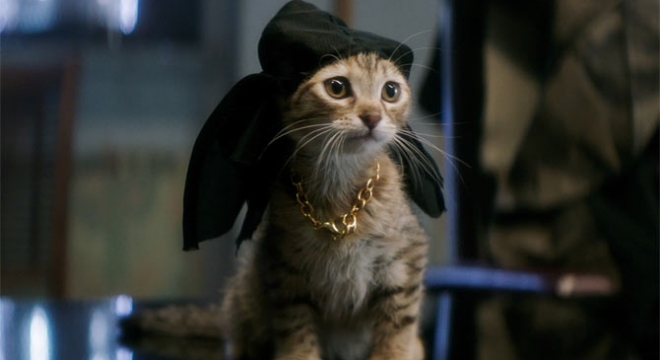 Key and Peele play Clarence and Rell, a family man and his stoner best pal living in suburban Los Angeles. Rell is wallowing in a recent breakup when he finds a cute little cat and adopts him, naming him Keanu. Then his house is burgled and Keanu is stolen. So he and Clarence team up to find the lost kitty. The problem is that their search leads them to vicious gang boss Cheddar (Method Man), who has fallen for Keanu's charms. When Rell and Clarence stumble into the gang's lair, they are mistaken for a pair of notorious hitmen, and decide to play along with it, straining to pose as vicious assassins in a series of escalating situations in which everyone is trying to kill everyone else.

This is a very clever play on the stereotype that every black man must be a violent thug. Rell and Clarence are nice guys from a relatively well-off neighbourhood trying with increasing desperation to mimic the vicious, street-smart goons they've seen in movies, which are their only point of reference. Along the way, they poke pointed fun at both urban crime thrillers and black subculture movies. Plus constant allusions to the career of Keanu Reeves, who even voices the kitten in a dream sequence. Key and Peele play these characters with a mixture of warm affection and dorky charm. And their interaction with the starry supporting cast is hilarious, from Cheddar's sharp henchwoman (Tiffany Haddish) to riotous cameos from the likes of Anna Faris, Will Forte and Luis Guzman.

But all of these expert scene-stealers don't have a chance opposite this painfully endearing little cat. And the loose plot always feels a little out of control, veering from one wacky set-piece to the next without much connectivity. This makes the movie feel very long, while the extreme violence begins to undercut the dopey goofiness. It's doubtful that the filmmakers realise that they are telling a story that enforces the idea that black subculture is so accustomed to gunplay that they take it as normal. So even if this movie is basically just engaging nonsense with a lot of heart, its darker edges tell another story.