Keanu Reeves picks up his supremely efficient hitman immediately where the 2015 original left him: regrouping with his new, as-yet-unnamed dog after taking down the New York mob that he used to work for. Director Chad Stahelski and writer Derek Kolstad have created another unusually satisfying action thriller, with sharply developed characters and a plot that holds more water than most of these kinds of movies. Obviously, it can't be as fresh as the first film, but it's thoroughly entertaining. 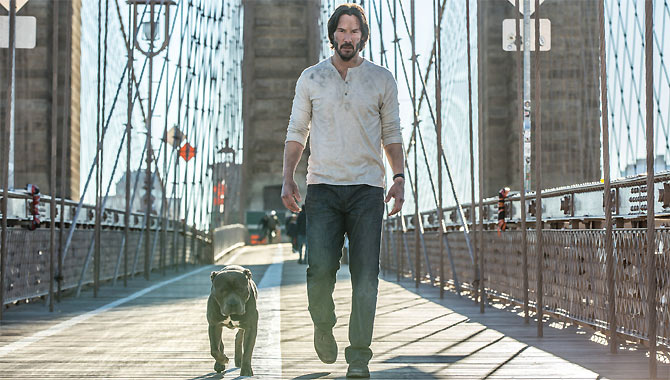 Reeves' John still just wants to be left alone, but after taking care of one loose end, he is contacted by Italian mafioso Santino (Riccardo Scamarcio), who calls in a blood oath. Unable to refuse, John heads to Rome to carry out a hit he knows will make his life exponentially more precarious, especially as it puts him into conflict with his old friend Cassian (Common). Sure enough, he now has an army of goons chasing him, led by mute thug Ares (Ruby Rose). So he returns to New York and gets in contact with an underground guru (Laurence Fishburne) who might be able to offer some respite from the hordes trying to kill him. And manager Winston (Ian McShane) is also willing to help John, as long as he abides by the rules of the criminal underworld.

The film is another superb mix of cool imagery and coherent action that moves briskly from one brutal encounter to the next. Vicious gunfights and car chases abound in this movie, and all are staged with bracing energy and a heightened sense of realism. Through all of this, Reeves maintains a sense of weary dignity in finely tailored suits that are refreshed after each messy encounter. How he keeps walking and fighting after each bruising fight is another question.

The colourful supporting cast adds texture all around him. These are all people who have clearly lived full lives, so the film has a remarkable sense of its own mythology as it alternates frantic, inventively staged violence with more quietly tense conversations. Shocking, cringe-induging moments abound, including a chance to see what all the fuss was about John's pencil skills. There's rather a lot more plot and character exposition this time around, which kind of slows the momentum, but it adds detail that will make further chapters even more gripping. And yes, it's clear that this isn't the last we (or the mafia) have seen of John.