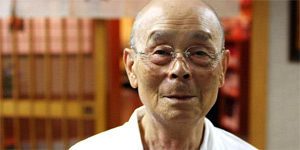 His Tokyo restaurant may only have 10 seats, but Jiro welcomes visitors who travel to Japan to taste the best sushi on earth. His lifelong goal is perfection, and he approaches this by having a rigid daily routine (he hates closing for public holidays), tasting the fish as he prepares it to make sure it's always better than yesterday. His eldest son Yoshikazu is his second in command, still waiting at age 50 for Jiro to retire. Younger son Takashi finally gave up and started his own restaurant across town, where he takes a more relaxed but equally quality-based approach.

The film is a shamefully delicious-looking parade of impeccably assembled sushi cross-cut with interviews with Jiro, his sons, food critic Yamamoto and others. But what makes it compelling to watch is the way it so beautifully expresses Jiro's personal philosophy. We see archival photos from his complex life, as he left home at age 7. Then later his intense work ethic meant that he barely saw his sons until he convinced them to work for him. Now Jiro's legendary status around the world means that when Yoshikazu finally inherits the restaurant, he will have to make sushi twice as good as his father to even be considered an equal.

Meanwhile, Jiro trains his apprentices to an almost impossibly high standard, teaching them his special methods (massage octopus for 40 to 50 minutes before cooking) and making them wait 10 years or more to earn the title shokunin. And even with their youthful exuberance, Jiro has more energy than they do. So while the film seems to drift off the topic now and then (following fish and rice suppliers, for example), it's still a remarkable portrait of someone who lived out his belief that you have to choose something you love as a profession, then try to do your job better than anyone else in the world.