It's been nine years since Matt Damon and Paul Greengrass collaborated on The Bourne Ultimatum, and now they're back. The plot feels like it was agreed by a committee, as thin as the non-title of this film. Honestly, this franchise offers endless options for titles, and they just decided not to bother this time. So even though the story has a whisper of soap-opera silliness about it (yet another blurred memory comes to light), the film is relentlessly entertaining, building momentum as it surges from dark drama to intense action. 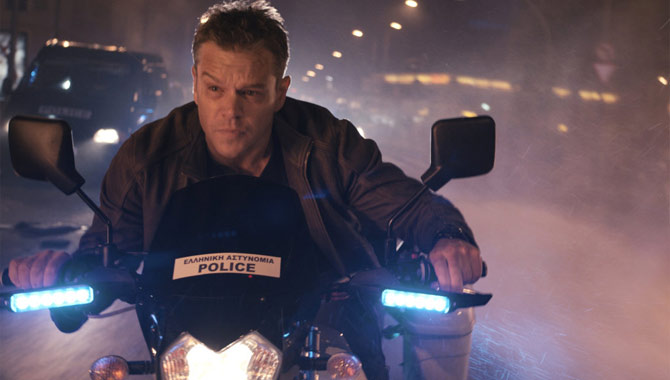 Since finally figuring out who he is, Jason (Damon) has been earning a living as a bare-knuckle boxer on the Greek-Albania border. Then his former cohort Nicky (Julia Stiles) uncovers a new piece in his life puzzle, which allows the CIA's Director Dewey (Tommy Lee Jones) to track them down. As he sends in a ruthless assassin (Vincent Cassel) to get rid of them once and for all, plucky CIA analyst Heather (Alicia Vikander) takes a different approach, determined to bring Jason back into the firm. But he's not coming in without a fight, and as the stakes rise, the chase shifts from Athens to Berlin, London and finally Las Vegas.

As all of this is happening, Dewey is also trying to strong-arm the billionaire founder (Riz Ahmed) of a hot social media platform to allow the CIA to have access to its customers. And he's heading to Vegas as well. This sideplot integrates cleverly with the main narrative, although its message about government overreach is a bit heavy-handed ("Privacy is freedom!"). Still, it adds some kick to the whizzy computer gadgetry that fills this franchise, from tracking devices and tiny earpieces to miraculous hacks.

The powerhouse cast adds plenty of heft to this nonsense. A very buff Damon growls and prowls through the film, speaking with his actions rather than his words. His reluctance to hurt or kill anyone makes him fascinating, and Damon adds layers of repressed emotion to the character. This creates a terrific contrast with his two nemeses here: the amusingly sardonic Jones and the casually murderous Cassel. And Vikander's Heather is a complex true believer with a scary sense of expediency.

All four characters are so tenacious that the build-up to their climactic showdown becomes almost unbearably intense. With his usual shaky-cam under tight control, Greengrass directs the action on a large scale with documentary realism, from the unpredictable fiery street protests in Athens to the insanely destructive final car chase. The film is steadily gripping, with engaging characters and surprising relevance in the social and political settings. So it doesn't matter that there isn't much depth here, as the movie becomes little more than an epic revenge scenario. But it's rare to find a spy thriller that gets the heart pounding like this.

Watch the trailer for Jason Bourne: