This umpteenth film adaptation of Charlotte Bronte's enduring classic perfectly captures the experience of reading the book. The story and characters envelop us so beautifully that we get lost in the experience. 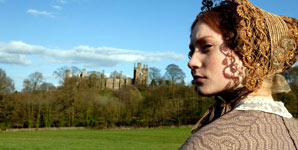 After being orphaned as a child, Jane (Clarkson) is sent by her selfish aunt (Hawkins) to a grisly boarding school where she's falsely scorned as a liar.

When she leaves at age 18 (now Wasikowska), she works as a governess for the ward (Moore) of the mercurial Rochester (Fassbender), finding friendship with the housekeeper (Dench) and, surprisingly, romance with Rochester. Alas, this doesn't go well, and when she flees she finds solace with rural parson Rivers (Bell) and his sisters (Grainger and Merchant). Surely she deserves some good news.

The film frames Jane's story with her flight from Rochester's house and rescue by Rivers, then we see her childhood and experiences with Rochester as flashbacks. This helps us understand her emotional state, letting us live through her "tale of woe" without wallowing in it. We understand from the start that the misery heaped on Jane is unfair, and also that she is strong enough to get through it. So we never lose hope that things will somehow turn around, even as her life gets increasingly bleak.

Wasikowska gives a visceral, layered performance that subtly expresses Jane's thoughts and feelings while maintaining the decorum of the 19th century setting. And her interaction with Fassbender is terrific, as we see Jane spark Rochester's interest and watch them soften to each other before his dark secret rips things apart. Meanwhile, Dench and Bell add delicate touches to their characters, giving us further insight into Jane's personality.

Even as he underplays the story's pivotal moment, director Fukunaga creates a film that's sensuous and sometimes terrifying. While Adriano Goldman's lush cinematography and Dario Marianelli's unobtrusive score add to the richness of the experience. Indeed, this film's internalised approach and sumptuous style are reminiscent of Polanski's near-perfect version of Tess. And telling such a familiar story in a way that sweeps us off our feet is no mean feat.