Like Headhunters, which was also based on a Jo Nesbo story, this Norwegian thriller almost plays more like a black comedy than an action movie. It's packed with hilarious characters and situations, but is also rather intensely gripping and gleefully violent.Detective Solor (Mestad) is investigating the discovery of seven dead bodies in Pink Heaven strip club on the Norway-Sweden border. He arrests the one survivor, Oscar (Hellum), who's caught holding a gun. But Oscar explains by telling a story about a football pool that he won with his roughneck employees Tor, Dan and Billy (Ousdal, Cappelen and Berning), leading to a series of hapless incidents on the way to the club. But Solor's sure he's stumbled onto the crime of the century. And clearly there's a lot more going on here than meets the eye.The events unfold in flashback as Solor interrogates Oscar about the bloodbath.

As he recounts the story, Solor keeps stopping him when things begin to sound fishy, such as the involvement of a local gangster (Andersson). But the more we get to know the characters, the funnier the film gets. These guys are such chuckleheads that it's not surprising when things start to go downhill very quickly. And following Oscar into the increasing chaos is both amusing and outrageously nasty. 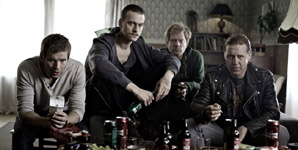 Hellum is terrific as a nice guy caught up in an unimaginable series of events that take one surreal twist after another. And writer-director Martens packs the film with continual sight gags and comical character details that make these guys both likeable and terrifying. Oscar's three colleagues are simply hilarious, as greed makes them turn on each other in random ways. And the script is especially well constructed, cleverly keeping us guessing about what might happen next.There are a couple of plot points that stretch credibility to the breaking point, but then this is a story about the way pure chance can change your life in ways you could never begin to expect. It's also an entertaining combination of comedy and thriller that makes us laugh one instant and cringe the next. And right to the very end, the story keeps twisting and turning, leading to a conclusion that's both corny and hugely satisfying.PICS: http://twitchfilm.com/news/ArmeRiddere.jpg http://www.norway.org/FileCache/Global/SiteFolders/webnew/jackpotnett.jpg/width_650.height_300.mode_FillAreaWithCrop.pos_Default.color_White.jpg http://www.theartsdesk.com/sites/default/files/images/stories/FILM/Jackpot-620x349.jpg