Rather than make a standard biopic about the most famous First Lady in American history, this film centres on just a few days in her life to offer some telling insights not only into the woman in question but also the culture of celebrity and the nature of political legacies. Yes, it's a complex, provocative film, artfully directed by Chilean filmmaker Pablo Larrain (Neruda) and anchored by a riveting performance from Natalie Portman.

The story is set in the aftermath of John F. Kennedy's assassination in 1963, as Jackie (Portman) retreats to her seaside home in Massachusetts to make plans for her future. She is visited by a journalist (Billy Crudup), who asks her about her experience in the days after her husband (Caspar Phillipson) was shot while sitting next to her in the back of a car. During these days, she has been faced with some big questions. Who is she arranging the funeral for? Herself? Her children? The American public? The future generations who will remember her husband? The only people she can confide in are her brother-in-law Bobby (Peter Sarsgaard), her assistant Nancy (Greta Gerwig) and a straight-talking priest (John Hurt). Her husband may have been a relentless philanderer, but Jackie is consumed by grief and unsure where her life will go now.

It's rare for a film to tackle so many themes so meaningfully, and Noah Oppenheim's award-winning script juggles all of these big ideas effortlessly, never losing focus on the complex woman at the centre of the storm. Portman gives a staggering performance that continually shows Jackie's various sides, both the darker private angle and the livelier public persona, as well as the tough-minded woman who knows that she alone can determine how her husband is remembered. That she falls back on her favourite musical Camelot to define her now-lost life is both moving and telling. And the film cleverly includes a smart recreation of her infamous television tour of the White House.

Larrain's direction is impeccable, resisting the usual slick Hollywood style for something much more textured and intriguing. Bright colours are splashed across lavish settings, but the tone remains grainy and honest. And the superbly well-played side characters are fascinatingly realistic in the way they orbit around Jackie in distinct ways. With an excellent Mica Levi score, the film is edited to swirl around these few days continually offering insights that catch the audience by surprise. It's a unique collision of politics, show business, glamour and tragedy. And the film is unmissable.

Watch the trailer for Jackie: 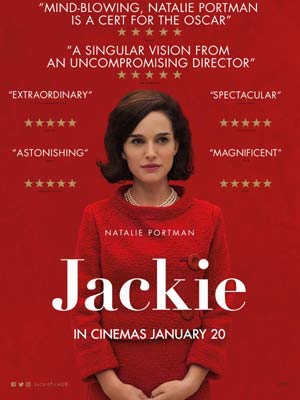