In the Dark Half

In the Dark Half Review

Moody and atmospheric, this low-budget British thriller gets under the skin as it explores the complex emotional life of a teen girl. And even if it's both elusive and overwrought, the film's eerie tone holds our attention. 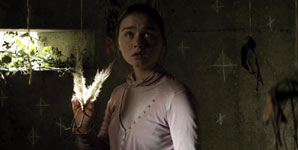 Siddons directs the film with an intensity that never lets up, portraying the suburban neighbourhood as a gateway between the lights of the nearby city and the deep, dark woods on the other side. These trees are surrounded by looming shadows, foreboding wildlife and flickering lights, hinting that there are spirits roaming the hills. At the centre is Marie's secret bunker, where she goes to talk to Sean.

This is a rather over-serious film that never relieves the pressure with real-life comedy or off-handed interaction. Everything is played for full emotional impact, which leaves the actors stuck in one-note performances.

Still, each one is terrific as a wounded, needy person who simply can't reach out to someone nearby. Barden captures Marie's overpowering need to understand life and death long before we begin to understand why. And Curran is terrific as the town pariah whose sad, quiet existence unravels so tragically.

Like The Sixth Sense, this film overlays a personal drama with a supernatural horror story while slowly filling in the details of the mystery until we have the full picture. Along the way there are some surprises in store, and director Siddons is maintains a fairly relentless sense of downbeat gloom. But this also gives the film a charge of genuine terror, including a few big jolts. The emotional layers of these characters are so raw that the film is increasingly painful to watch. But that only means that the filmmakers are doing their jobs effectively.