With layers of meaning, this offbeat documentary by James Franco and Travis Mathews (I Want Your Love) provokes viewers as we watch its ideas challenge the people who are on-screen. The central issue is artistic expression, more specifically the way sexuality is depicted and censored in the movies. 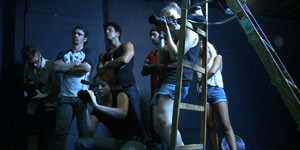 Franco says that his goal as an artist is to continually shake himself up, and this project offered a specific challenge: "I don't like the fact that I have been brought up to think in a certain way. We can put people killing each other in movies, but we can't put realistic sex." To explore the idea, he goes back to the notorious 1980 thriller Cruising starring Al Pacino as a cop who goes undercover in the gay leather-bar scene to chase a serial killer. The film was the subject of protests while it was shooting and when it was released, and director William Friedkin (hot off his work on The Exorcist) was forced to cut 40 minutes from the film to secure an R rating.

Franco and Mathews' idea here is to recreate these lost 40 minutes, imagining what they could possibly have contained. So they gather a group of actors and a crew and document the process, showing us behind-the-scenes conversations as well as some fairly explicit finished footage. At the centre is Franco's friend Val Lauren, who takes the Pacino role with more than a little trepidation. The charged conversations between Lauren and Franco are the heart of this film, as they waver between fear and excitement over the project. There's clearly a spike of adrenaline for everyone as they all put themselves into an unfamiliar situation, then explore why it feels so uncomfortable.

In other words, this is a movie about how we have been conditioned by society to respond to certain issues in a certain way. We have been desensitised to violence through brutality on TV and in videogames, and even porn is secretly acceptable. But no one wants to depict sex honestly, leaving only more adventurous filmmakers to test the boundaries between character or story-based sex scenes and pornography. The best moments in this doc are the backstage conversations between actors and filmmakers who want to understand the big issues they are dealing with. And the fact that maybe gay sex isn't actually that shocking after all.