A sharp improvement on the original, this second entry in The Divergent Series has a much stronger sense of its premise and characters, which makes it much more exciting to watch. Where Divergent felt gimmicky and a bit shallow, this chapter pushes the characters much deeper, giving the actors a chance to bring them more engagingly to life, which makes the odd set-up more involving as well. 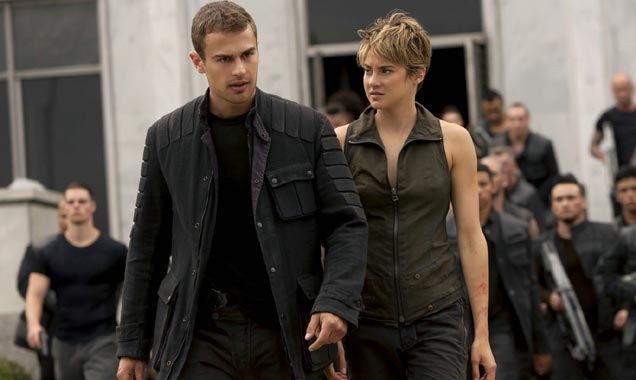 It picks up immediately where the first film ended, with Tris (Shailene Woodley) escaping from post-apocalyptic, segmented-society Chicago with her boyfriend Four (Theo James), her brother Caleb (Ansel Elgort) and their shifty cohort Peter (Miles Teller). Hiding out in the Amity agricultural community, they know that Erudite leader Janine (Kate Winslet) has sent her goons (Jai Courtney and Mekhi Phifer) to find them. Actually, she needs a divergent to open an artefact from the pre-war days so she can rid Chicago of pesky divergents forever. When their location is discovered, Tris and pals head back into the city, teaming up with factionless leader Joanna (Naomi Watts) and getting help from the head of Candor (Daniel Dae Kim) before going to Erudite to face Janine.

The story has a strong push to it, driving these rebels ever closer to a confrontation with their nasty nemesis, and their journey is fraught with surprise wrinkles, vicious battles and some mind-bending imagery. In fact, there are so many dreams, flashbacks and computer simulations that it's not always clear if what's on screen is actually happening or not. But it all looks so cool that we hang on to discover where it'll go next, so the two hours passes briskly, and sometimes breathlessly. The film looks terrific, as director Robert Schwentke keeps the focus on the characters while creating some amazing effects around them, especially in the simulation sequences.

By centring on the people rather than the premise, Schwentke also makes the factions themselves feel a bit more plausible (helped by a late revelation). This adds a sense of context that was missing the first time around, allowing the drama to become more resonant and the gritty, intimate action much more thrilling. It also gives the cast much more meaty roles to play with, and Woodley shines in the central role, adopting a more stubborn inner rage that adds clever edges to every scene. The supporting cast shows more depth as well, which offers considerable promise for the next chapters of the story. But it's Winslet who steals the show, exposing a tiny hint of uncertainty underneath this ruthless power-seeker.