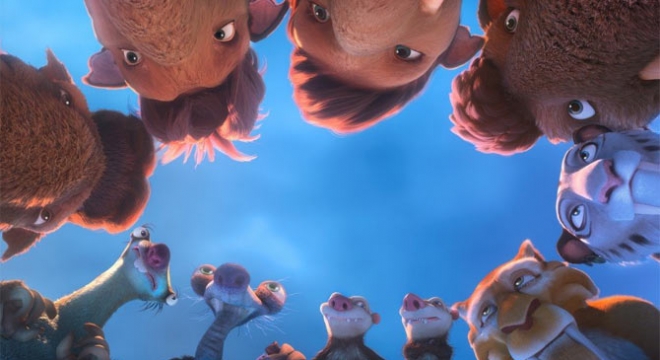 After their previous escapades, the expanding herd of prehistoric critters is living a happy life together, thinking about love. Mammoths Manny and Ellis (voiced by Ray Romano and Queen Latifah) are struggling with the idea that their daughter Peaches (Keke Palmer) has fallen for the too-cheerful Julius (Adam DeVine). Sid the sloth (John Leguizamo) has just been dumped and feels like he'll never find a partner. And tigers Diego and Shira (Denis Leary and Jennifer Lopez) worry that their violent nature will make them terrible parents. Then suddenly there's a bigger issue to worry about: a giant asteroid is heading for Earth, threatening them with extinction. With the help of nutty weasel Buck (Simon Pegg), they come up with an idea to save the planet. They also discover a magical place called Geotopia, ruled by the groovy Shangri Llama (Jesse Tyler Ferguson).

The main attraction here is the growing voice cast, comics who are adept at creating characters who are endearing and amusing. The movie is hilarious all the way through, and director Mike Thurmeier adds a continual stream of witty visual gags, using the 3D to great effect. But it's difficult to escape all of the nagging problems with this franchise, from the dodgy prehistoric timeline to the fact that the only thing of any interest for these animals is to find true love, get married and have children. Even the youngest viewers will see through this, although they'll be too busy laughing to care.