Sharply well-made and powerfully performed, this Italian drama weaves together three perspectives to explore a mystery that's so involving that it pushes the central theme about the value of a human life into the background. Of course financial issues are far less interesting than personal drama, but even if the message is rather muddled, this is an involving low-key dramatic thriller that has a lot to say about human ambition. 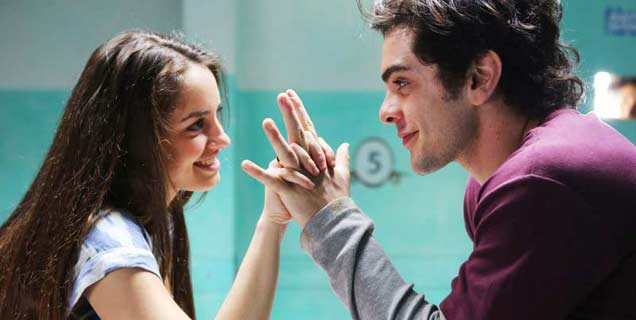 The story is told in three chapters, as the same six months are seen through three perspectives. First, Dino (Fabrizio Bentivoglio) is struggling financially when he realises that his daughter Serena (Matilde Gioli) is dating Massimiliano (Guglielmo Pinelli), son of noted hedge fund manager Giovanni (Fabrizio Gifuni). So Dino illicitly borrows cash to make an investment, then is shocked when the economy crashes just as his wife (Valeria Golino) gets pregnant. Second, Giovanni's wife Carla (Valeria Bruni Tedeschi) convinces her husband to let her restore an abandoned local theatre, then she has an unexpected spark of romance with her artistic director (Luigi Lo Cascio). And third, Serena doesn't actually want romance with Massimiliano, and after telling him she just wants to be friends she meets Luca (Giovanni Anzaldo), a poor guy who isn't the thug everyone thinks he is.

All of this builds up to a fateful event witnessed in the film's prologue (and settled in the epilogue), letting each of the three strands intersect and interact in surprising ways. As the story is revealed from different angles, new truths emerge about the interplay between people from the upper, middle and lower classes - from the obscenely privileged who can buy their way out of anything to those who never seem to get a break. And the complex script never draws moral lines in the expected places, allowing the characters to continually surprise us with their reactions.

The talented cast brings out all kinds of details in each scene. The standout is Bruni Tedeschi, who makes Carla into a strikingly sympathetic character against all odds. All of the characters have real depth to them, which makes the film's personal drama hugely involving, especially since it's shot and edited in a straightforward, slick way that lets the uneven edges of each person spring to life. In addition to the questions raised by the central mystery, the film is a fascinating exploration of how the classes interact in a modern European society that's perhaps not so different from its feudal past. So the attempt to layer in a financial message at the very end feels rather unnecessary.