How to Survive a Plague

How to Survive a Plague Review

Nominated for the Oscar, this documentary is one of the most involving and moving films you'll see all year. At its core this is a movie about how a decent society should behave, even to the point of helping people who hurt themselves. Smokers, overeaters or bad drivers get assistance, but for a period in the 1980s, America's government, global businesses and the Catholic church turned their backs on people diagnosed with Aids, condemning them to a terrible death. But this isn't a gloomy movie: as the title suggests it explores those who made it through what they felt was a war. 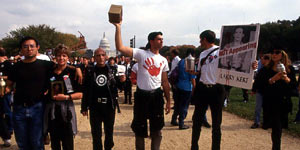 After six devastating years of Aids in America, there was virtually no way anyone could get treatment, which meant that contracting HIV was a death sentence, and homosexuals were ruthlessly persecuted. Finally in 1987 a group of New Yorkers said enough is enough, forming Act Up as a peaceful protest group that forcefully demanded an end to discrimination and homophobia. They also pushed the pharmaceutical companies and the government to approve more affordable, more effective treatments.

The film is compiled from first-hand interviews with men and women who experienced these events, as well as an astonishing range of archive footage that conveys the wrenching anger, fear and resilience of a group of people who believed they should be treated with dignity rather than ignored or banished. And filmmaker France assembles this into a driving narrative that grabs hold of us and never lets go, focussing on the people and their personal experiences, while letting the political and medical issues linger in the background.

This is a very clever approach to such a big topic, and there's plenty of humour to balance the wrenching emotions. The film never presents these people as saints, since we see the various factions, disagreements and mistakes they made. But the way they doggedly held the course in the face of death makes them true heroes. And when we see them at the time, talking about how they doubt they'll survive long enough for treatment to become available, it gives us a jolt of inspiration.