Like The Hangover, Horrible Bosses was a movie no one really wanted to see a sequel to, but here it is anyway: the same film, but even more inane. It is also likely to make plenty of money from audiences looking for mindless entertainment on a Saturday night. Although "mindless" seems almost complimentary when a movie is as idiotic as this one is. There's so little to its plot that the whole film seems to evaporate before the end of the climactic chase scene. 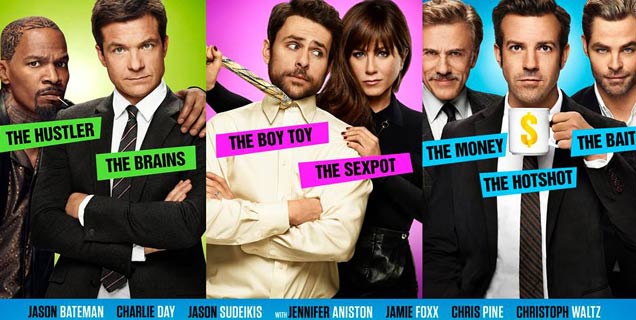 It's been a couple of years since Nick, Kurt and Dale (Jason Bateman, Jason Sudeikis and Charlie Day) tried to solve their problems by trying to kill their bosses. Instead, they've become inventors, and have just sold their Shower Buddy to a popular catalogue company owned by Bert (Christoph Waltz). They go all out to fill his order, putting their necks on the line, and Bert leaves them hanging there. Faced with the prospect of losing everything, they again consult their criminal pal Jones (Jamie Foxx), who helps them launch a "kidnaping". The idea is to grab Bert's son Rex (Chris Pine) and demand a ransom to cover their debts. But Rex takes over the operation, asking for a lot more cash and causing a lot more chaos. They also run into a couple of their old bosses: sex-crazed Julia (Jennifer Aniston) is still determined to sleep with Dale, while Harken (Kevin Spacey) can still freak them out from behind bars.

Director-writer Anders and cowriter Morris use almost the exact same formula this time, going for laughs in a carefully plotted caper in which everything that can go wrong does. Although instead of merely being inept, these people are all morons. Bateman's Nick is essentially the straight man in the movie, and even he fails to notice that they've borrowed and spent a vast sum of cash without even a simple contract with Bert. Meanwhile, Kurt and Dale are mind-achingly stupid, bungling every single moment so completely that it's hard to see them as functioning adults. Pine isn't much better, but at least we haven't seen this schtick from him before, and he's rather good at it.

Spacey makes the most of his two scenes, even if they both have the same lame punchline. And Aniston once again plays on the fact that it's shocking to hear her talk dirty (well, it was last time). Foxx is much more involved this time, but wisely stays just outside the the stupidity, while Waltz avoids it completely in a rather underwritten villain role. But then everything about this film is underwritten, relying on cheap gags and trite slapstick. Even so, there are just enough genuine laughs to maintain the illusion that the film is funny. But discerning moviegoers will know better.