With a low-key pace and extremely loose plot, this introspective drama gets deep under the skin as it explores a pivotal summer for two brothers. For a film with very little dialogue, it's remarkably involving, with characters who are so vivid that they hold our sympathy right to the end. It's also shot and edited with remarkable honesty, revealing the connections between people through each tiny glance and subtle touch. 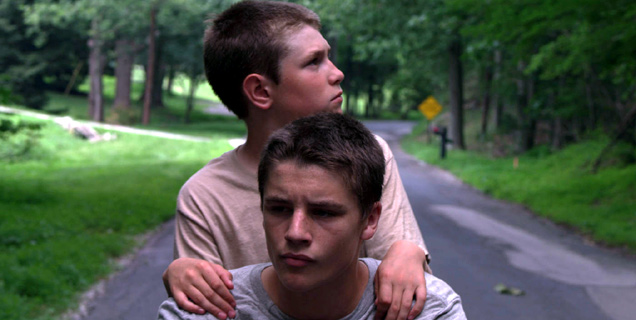 During one summer in a rural American town, teen Eric (Nathan Varnson) and his little brother Tommy (Ryan Jones) don't have much to do. They hang out in the forest with their friends, wrestling, swimming and walking along a disused railway viaduct, lost in their childhood games. Then one day the body of Tommy's friend Ian (Ivan Tomic) is found under the bridge, and as the community goes into shock the boys are suddenly confronted with an adult world that had never concerned them before. Eric's best pal Tristan (Thomas Cruz) begins to consider his own mortality, reasoning that maybe he'd be better off dead. And in search of some sense of meaning, Eric and Tommy blame Ian's harsh dad (Colm O'Leary) for his death, beginning an escalating feud with him.

The title refers to the grown-up propriety that seems so suddenly important to these kids: it's about stifling laughter at a funeral. But writer-director Daniel Patrick Carbone never pushes the point, merely observing the sometimes inexplicable behaviour as these boys try to pretend that they're not consumed with the ramifications of death. This gives the entire film a remarkably truthful tone as this fateful summer unfolds and the boys learn to live in this "new" reality. It also allows the excellent young actors to give performances that expose their inner thoughts through physicality rather than words. Everything is understated, but it's still funny, touching, endearing and sometimes downright scary.

The way the story meanders aimlessly sometimes makes the film feel draggy, but there's a lot going on in every scene, beautifully played by Jones and Varnson, who create a striking blend of sibling camaraderie and rivalry. Watching them struggle with such a major event is both painful and essential, and Carbone shoots and edits the film in a distinctive style that draws out earthy authenticity rather than dramatic fireworks. This isn't a film about plot, it's about characters and emotions. And in the end the film effectively evokes memories of that moment when life stopped being quite so simple, and when those exaggerated childhood problems suddenly began to feel insignificant within the much bigger picture.