Guardians of the Galaxy Vol. 2 Review

It was never going to be easy to match the impact of 2014's Guardians of the Galaxy, which jolted the Marvel franchise to life with its fresh comedy and freewheeling adventure. This sequel is still a lot of fun, but it's also far more controlled, a conventional, plot-based step of the Marvel universe. And all of the characters are angry about everything and everyone. Thankfully, there's also an emotionality that sneaks into the final act. 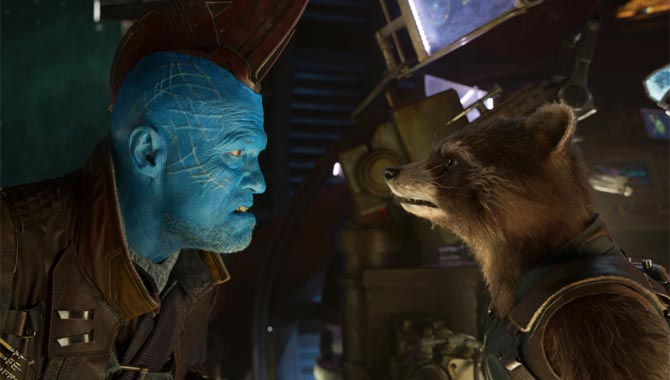 Now working as a team, the bickering Guardians just manage to complete their latest mission when Rocket (Bradley Cooper) makes an enemy of a tenacious high priestess (Elizabeth Debicki). Her fleet chases them into an encounter with Ego (Kurt Russell), a god-like being who claims to be the father of Guardian leader Peter (Chris Pratt). So Peter takes Gamora and Drax (Zoe Saldana and Dave Bautista) to check out Ego's planet, while Rocket and Baby Groot (Vin Diesel) fend off both the priestess and Peter's old mentor Yondu (Michael Rooker), who arrives with a large posse. And then there's Gamora's perpetually furious sister Nebula (Karen Gillan), who's on the rampage, determined to get revenge against everyone who has slighted her.

There's an underlying rage that drives everyone's actions, and the constant screaming matches become exhausting as the film progresses. The worst offender is Rocket, who expresses his perpetual aggravation in a stream of tetchy tirades. Thankfully, the dialogue is sharply written, with wicked insults to keep the audience smirking along. And there's also a nice sense that all of this fury is masking a deeper affection these misfits have for each other, which boils over in some remarkably strong dramatic scenes. Pratt and Russell are both terrific, seizing every chance to play with the comedic and dramatic notes. There are nice moments for Rooker, Saldana and Gillan, plus some witty cameos. And while Baby Groot is almost painfully adorable, it's Bautista's hilariously open-hearted Drax who steals the show.

Writer-director James Gunn abandons the first movie's anarchic tone for a more standard sci-fi action adventure. There's a lot of humour, wildly colourful production design and of course a fabulous classic rock soundtrack, but aside from the witty title sequence, the action is noisily incoherent, with far more reliance on digital animation, which removes the human element. And the plot feels more episodic, setting up strands that are never resolved, so we're enticed to come back next time. Thankfully, the film still has that knowing blast of raucous comedic energy to it, so we wish the next episode was next week, rather than a few years from now.

Watch the trailer and clips for Guardians Of The Galaxy Vol 2: