Romanian filmmaker Cristian Mungiu (4 Months, 3 Weeks and 2 Days) recounts another staggeringly detailed story about his home culture. And the way it plays out is so realistic that it almost feels like a fly-on-the-wall documentary. Packed with authentic characters we can easily identify with, it's powerfully thought-provoking, dramatically gripping and bursting with meaning, even though it never preaches at us. 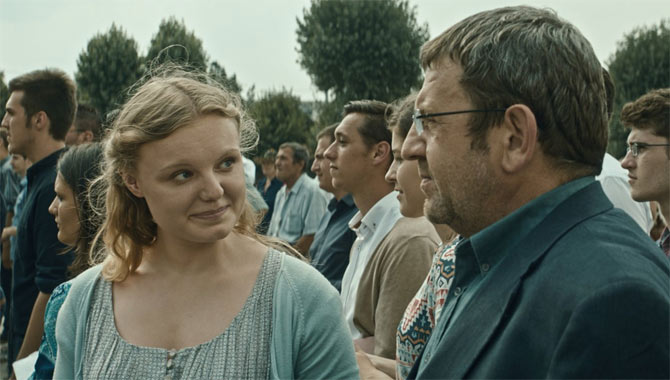 In Bucharest, Eliza (Maria-Victoria Dragus) is a teen whose good grades have earned her a scholarship to a British university. But the day before her final exams, she's attacked by a stranger and left badly shaken. Concerned that this will affect her marks and derail her future, her father Romeo (Adrian Titieni) speaks to a few friends who might be able to help. Each of them owes someone else a favour, and could also use one from a top doctor like Romeo. Meanwhile, Romeo has had some worrying news from his mistress Sandra (Malina Manovici), whom his wife Magda (Lia Bugnar) is fully aware of. And Eliza's older boyfriend Marius (Rares Andrici) is trying to talk her out of leaving Romania.

All of these plot threads weave together seamlessly as an exploration of the way each of us compromises our morals in big and small ways, explaining away our own actions while expecting more from everyone around us. At the centre of the web, Romeo is a principled man who quietly investigates Eliza's attack because the police won't do anything. Titieni is terrific in the role, revealing an intelligent man whose calm exterior obscures a more tightly wound internal panic. And as the three women in his life, Dragus, Manovici and Bugnar bring out extra layers of depth that make their own journeys utterly riveting.

Mungiu is exploring a society that is only now emerging from decades of corruption, so it still operates on a system of tit-for-tat favours. People only help each other because someday they'll be able to call in the debt. And the snaky plot exposes how this affects every situation from a small family to the nation's government. Most intriguing is the way everyone understands that this isn't the right way to live, but it might be the only way to survive. Mungiu orchestrates all of this over two hours of riveting encounters that never tip over into melodrama. So in the end, it's the people who linger in our minds, making us think about our own lives from a new perspective.