Based on a true story, this lively and sometimes outrageous adventure is packed with twists and turns that the audience never sees coming. It's a complex series of events that sometimes gets a bit bogged down in the under-explained details, but the characters are fantastic. And at the centre, Matthew Mcconaughey shines in a role that requires him to completely change the way he looks.

It's set in the late 1980s, as the fast-talking salesman Kenny (McConaughey) is trying to raise funding in Reno for a project he has been dreaming about for decades: prospecting for gold in Indonesia. He is sure there's a fortune in those mountains, but everyone else is dubious. And even as he's on the verge of losing everything, his wife Kay (Bryce Dallas Howard) quietly stands by him. In desperation, he gets on a plane to Jakarta, pitching his idea to local adventurer Michael (Edgar Ramirez), who escorts him into an area populated by head-hunters. When the companies back in America hear that they've found gold, there's more money than Kenny and Michael can count. But the FBI suspects it's a scam.

McConaughey is magnetic as the balding, overweight Kenny, a guy who simply won't take no for an answer. He is convinced that there's gold in the rainforest, even though no one has ever seen any, and his optimism is infectious to both the other characters and the movie's audience. This makes all the men in suits opposite Kenny look rather dull by comparison. Howard gives her role a powerful kick of emotion, although Kay is sidelined by the plot. And Ramirez gets some terrific scenes as the Indiana Jones-style explorer. All of these people seem to be caught up in a flood of events they have no control over, and the film races along without pausing for breath.

This kind of makes the movie feel like it's scamming the audience, blinding us with reports of profits and business plans when we can see that something nefarious is going on. The events are so crazy that they would be impossible to believe if they weren't true. But the thing that catches our attention is Kenny's personal journey, as his wildest success leads him into a hedonistic lifestyle that gets increasingly dangerous even though he never loses faith in his vision. This positive energy carries us through even when the film begins to feel somewhat superficial. And even if Kenny's big dream doesn't quite go as hoped, the movie reminds us of the power of hope.

Watch the trailer for Gold: 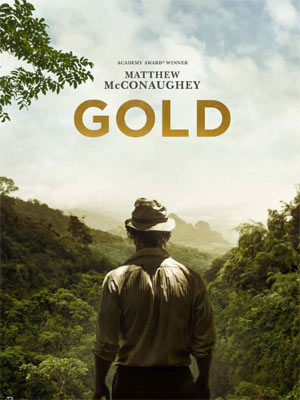