This documentary takes a remarkably frank look at the fashion business, using the unusual perspective of a young Russian seeking work in Japan. And along the way it reveals unsettling truths about the global modelling industry. 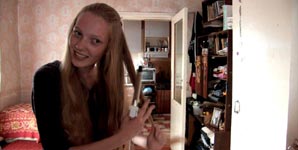 In Siberia, hundreds of thin young women gather in swimsuits to audition to become a model. But the scout, Ashley, isn't looking for just any model: she needs to be suited for the Japanese market. Ashley settles on 13-year-old Nadya, and takes her to Tokyo to go on a series of casting calls. But Nadya's experience is nothing like she or her family imagined it would be.

The film is shot and edited with minimal fuss, observing scenes with a sometimes uncomfortable intimacy. In Siberia, the filmmakers follow Nadya to her house. She considers herself a "grey mouse", just an ordinary girl, but her lively agent Tigran encourages her to go for it. And even though Nadya is clearly worried about travelling so far from home, her family supports sees it as an opportunity, as Nadya will earn a substantial fee that will help finish building work on the house.

A former soldier, Tigran idealistically notes that, for these girls, modelling may provide the only way out of a dead-end situation in Siberia, helping them grow into poised, responsible women. But Ashley is a cynical ex-model who understands the harsh realities. She observes that the industry changes minute-by-minute, and that it's based on nothing more than an obsession with youth. She also talks about her own experiences as a model in a cruel business.

Ashley admits that scouting is an addiction: the stimulation of new places and discovering extraordinary new girls. By contrast, Nadya is in Japan on her own with no money, and it's genuinely distressing to watch her try to cope with uncertainty and homesickness. should she go in debt rather than stay for "other work"?

By taking an off-centre approach, the filmmakers reveal some terrifying truths about a global industry that makes a fortune by exploiting anyone they can.

Surviving, let alone succeeding, requires an incredibly thick skin and a tenacious desire to remain grounded in what's real rather than the promises everyone makes. Ashley and Nadya, and no doubt thousands of other girls, have learned this the hard way.