With an approach that emphasises internal feelings and character journeys, over more obvious things like narrative structure and story arcs, this Brazilian-German film challenges audiences to explore a series of important issues in ways movies rarely attempt to do. Director-cowriter Karim Ainouz makes a movie that simply refuses to be pigeonholed as a gay romance, instead focussing on three young men who are trying to plot a course in life even as it keeps taking unexpected turns. 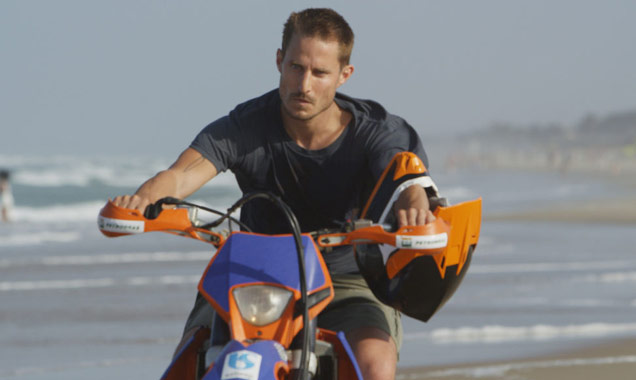 The story opens on the wild Futuro Beach in Fortaleza, Brazil, where lifeguard Donato (Elite Squad's Wagner Moura) loves swimming so much that his adoring little brother Ayrton (Savio Ygor Ramos) calls him Aquaman. But things change for them when Donato has his first unsuccessful rescue, as a biker (Fred Lima) drowns in the rough surf while his friend Konrad (Clemens Schick) survives. Trying to make sense of things, Donato befriends Konrad, and a surprising flash of lust leads to a growing relationship between them. Eventually, Donato travels to Berlin to see Konrad, and he decides to stay there. Years later, Ayrton (now Jesuita Barbosa) follows his brother to Germany to find out what happened to him.

Ainouz tells this story with very little dialogue, conveying the story through visual clues instead of words. This means that we are forced to pay attention and invest elements of our own lives in the story in order to understand it, which offers a unique experience to every audience member, as we all travel through the story differently. It's a fiercely clever approach to storytelling, and it essentially shifts the film from a standard romance into a much more involving and important exploration of migration, specifically how we all must leave our past behind in order to become the person we need to be.

To convey these ideas, the actors deliver staggeringly transparent performances that require deeply honest interaction between them. Moura and Schick are fascinating together, a very manly military swimmer and biker-mechanic whose relationship is expressed through masculinity rarely seen in a gay-themed film. This makes their emotions that much more powerful. And Ramos and Barbosa have some remarkably strong moments of their own in the contrasting locations of sun-baked Brazil and grey-drizzly Germany, respectively. Through it all, Ainouz beautifully captures a sense of time and place, of young men struggling to plot their own course through the world, overcoming some obstacles and running smack into others. All they know for sure is that they need each other to survive.