With sometimes unnerving honesty, this multi-strand Mexican drama explores male sexuality through stories set at four stages of life (or four phases of the moon). So even if the film feels sometimes overscripted and uneven, it's so intimate that it can't help but get under the skin. It's rare to see a film explore the experiences of gay men in such a deeply personal way that will resonate strongly with anyone, regardless of age, gender or sexuality. 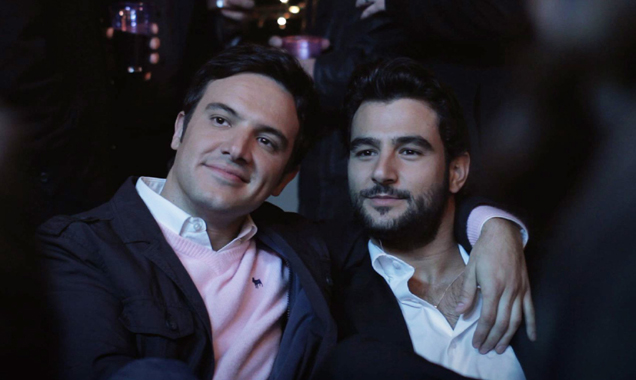 Set in Mexico City, the four stories are interwoven, connected strongly by their themes. Mauricio (Gabriel Santoyo) is a pre-teen just discovering that he's more attracted to his friend Oliver (Sebastian Rivera) than the girls, and he knows his curiosity could be a problem. In his early 20s, Fito (Cesar Ramos) reconnects with his childhood buddy Leo (Gustavo Egelhaaf), and while both are straight they find their mutual attraction irresistible. But Leo doesn't want anyone else to know. In his 30s, Andres (Alejandro de la Madrid) is terrified that his boyfriend of 10 years, Hugo (Antonio Velazquez), is going to leave him for another man (Hugo Catalan), so he sets a plan in motion to save the relationship. And married, retired poet Joaquin (Alonso Echanove) secretly visits a local sauna, trying to connect with an arrogant, muscled escort (Alejandro Belmonte).

Filmmaker Sergio Tovar Valverde slices straight through Latino machismo by showing these men as strong people whose deepest desires put them at odds with expectations. All of them yearn for love and attachment but worry about rejection from society, family and the objects of their affection. So even though the plots never intersect, there's a strong connection between the stories that makes them sometimes feel like four alternate-reality elements of one man's life. The most involving strand is Fito and Leo's, as it tackles such a wide range of emotions with gritty realism. By comparison, Andres and Hugo's story feels rather soapy, dealing with conflict in a preachy way that seems unlikely for a couple that's been together for a decade.

A few of the characters are somewhat underdeveloped, including Echanove's geriatric poet, although his storyline takes the most artful approach, evoking a complex emotional response. And the strongest character is young Mauricio, played with startling transparency by Santoyo as an intelligent boy who knows the truth about himself and refuses to ignore it just to keep the peace. With situations this earthy and truthful, the film is packed with revelatory moments that easily transcend its sometimes simplistic production values. And the film's subtle power may help change the way people think.