There's a startlingly honest tone to this difficult Polish drama, which confronts issues of sexuality and machismo in complex ways. And even though it's rather bleak, the story is involving and even compelling as the naturalistic acting and filmmaking hold our attention. 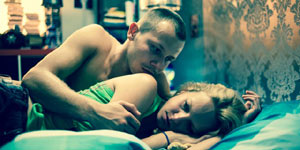 At the centre of the story, Kuba (Banasiuk) is an athletic and masculine swimmer in his mid-20s whose sexy girlfriend Sylwia (Nieradkiewicz) is living with him and his mother Ewa (Herman). But Kuba is clearly struggling with his internal desires, which are further sparked when he meets Michal (Gelner) on a night out. As their friendship develops, there's definitely a spark of mutual attraction between them, but Kuba can't even begin to admit that he might be feeling something. Michal on the other hand is much more open about it, admitting his romantic feelings and turning to his mother (Kuna) for help with coming out to his father (Zbrojewicz).

Polish cinema has been reluctant to explore homosexuality on-screen, and this film is almost a companion piece to the Berlin-winning In the Name Of, which tackled the same themes in a very different way. The title refers to the way the city looks through tear-filled eyes, and offers a rare touch of emotion for characters who are reluctant to admit their true personal longings. As Kuba, Banasiuk offers a striking portrayal of a young man who feels betrayed by his emotions. This is a prime specimen of masculinity, often naked on screen as he struts around the locker-room or lounges in bed with Sylwia. And his internal yearning for the love of a man makes him doubt everything about himself.

This certainly isn't the kind of gay drama we're used to seeing in the West, where these issues are tackled head-on. This film is much more delicate about it, admitting that in some parts of the world there are deep-seated cultural issues and generational factors that make it very difficult for gay youth to be honest with themselves and others. Thankfully, filmmaker Wasilewski finds reasons to be hopeful in the repressed Polish society. And his beautiful photographic style, particularly in the underwater scenes, gets deep beneath the skin.