It's impossible to understate the importance of this documentary in helping us see exactly what life is like in occupied Palestine. By sticking so closely to one perspective, the film opens itself to accusations of manipulation and one-sidedness. But that's precisely the point as it captures details of the daily situation in Israel and Palestine that we have never seen before. And it's assembled with real skill by journalist Emad Burnat. 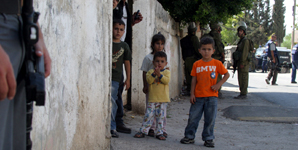 Burnat decided to start documenting his life when his son Gibreel was born in 2005. Using a home video camera, he shows the family home in the village of Bil'in with his wife perturbed Soraya and kids. And we also meet three important friends: the likeable Bassem (who everyone calls "Phil"), hotheaded Adeeb and nice-guy Daba. So as the Israelis partition his family's olive grove with a huge fence and no man's land, Burnat and his friends begin peaceful protests. But the Israeli police and settlers respond with abuse, teargas, arrests and even bullets. Even when they take the police to court to get their land back, it takes five years for the Israelis to accept the verdict.

Through all of this, Burnat watches Gibreel's reaction to the world around him. His first childish experiences involve violence and fear, and he simply can't understand why anyone would want to shoot his friends. He grows up seeing Israelis as nothing but masked thugs who wave their big guns rather than talk. As one camera after another is smashed or shot by the soldiers, Burnat tenaciously captures some very big events, including a friend's death and his own near-fatal car crash.

Without ever saying so, it's clear that what we're seeing is a present-day form of Apartheid. And Burnat's voiceover injects not only lucid narration of the events but also his own thoughts and feelings, which makes the film that much more involving. Israel's supporters may complain that this doesn't give their side of the story, but that's not what this film is documenting: it's showing you how it feels to be oppressed in your own home, stripped of freedoms and basic rights. And this makes it utterly unmissable.